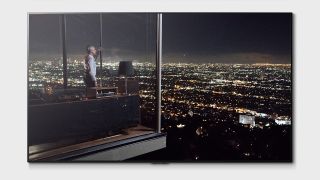 LG makes some of the best TV sets we've ever tested. The cream of its 2020 crop – its OLED TVs – run the gamut from fairly affordable 4K HDR sets to a flagship 77in 8K TV. But which is the best TV for you? And does LG really make the best 4K TVs? Join us as we explore LG's class of 2020 to assess which OLED TV deserves a spot in your home.

LG is a major player in the TV game. Indeed, LG has won 'best TV' at our annual Awards for the last three years running, thanks to its premium OLED panels, which produce a stunningly natural picture.

As well as manufacturing its own OLED TVs, LG sells its OLED panels to the likes of Panasonic, Sony, Hisense and Philips. So even if you don't end up buying an LG-branded TV, you could still find yourself watching an LG OLED panel.

But, technology aside, how does one choose the best TV? As a rule of thumb, it's best to go for the biggest TV you can afford and have room for. The larger the screen, the more immersive the experience. Plus, larger screens can reveal extra detail and shading that you might have missed on smaller screens, thus breathing new life into your favourite movies.

If you have lots of space and an extremely healthy budget, you might consider LG's jaw-dropping 88in ZX 'Real 8K' OLED TV. However, most buyers will make a beeline for the company's 55in and 65in OLEDs, which offer a fair slice of cinematic scale at far more attainable prices. This year has also seen the arrival of the world's first sub-50in 4K OLED, the brilliant LG OLED48CX. No other TV brand can match that choice of OLED screen sizes.

LG's TVs are also the only ones on the market to have officially certified HDMI 2.1 sockets. This means they benefit from features such as eARC (Enhanced Audio Return Channel), ALLM (Auto Low Latency Mode) and VRR (Variable Refresh Rate). The last of those will be particularly appealing to gamers looking to upgrade to PS5 or Xbox Series X later this year.

LG's excellent webOS operating system has also been updated. It features all the latest streaming apps (notably Apple TV and Disney+) plus a new Sports Alert mode, which delivers alerts when your favourite team is playing live or featured on TV. It's worth noting that LG's TV are currently lacking the major UK TV catch-up apps, including BBC iPlayer, but we hope to see the issue rectified soon. In the meantime, a cheap streaming stick would solve the problem.

Ready to feast your eyes on some premiums OLED screens? Read on as we explore the best TV sets in LG’s 2020 line-up…

Note: there are some 2020 LGs OLED TVs that you can't buy yet, such as the long-delayed LG RX 4K OLED TV – a 65in 'rollable' display that originally debuted at CES in January 2019. The cheaper 'BX' OLED range (55in, 65in, 77in), which combines the latest panel with some last-gen processing tech, isn't on sale yet, either.

Let's start with the crowdpleaser – the excellent 'CX'. It's LG's most affordable OLED that offers the company’s most up-to-date panel and processing tech, which gives it the most all-round appeal.

We awarded the 48in OLED48CX and 55in OLED55CX models a well-deserved five star rating and praised their 'natural performance, lovely design and improved motion handling'.

The 48in CX is of particular note as it brings flagship OLED picture quality to a 'smaller' size screen for the first time. If you don't have acres of space, and want a cinematic experience from a set that won't dominate your room, the 48in CX should be right at the top of your list.

Go further up LG's 2020 range – to the ZX, GX and WX – and you'll be rewarded with swankier designs and better sonics, but you won’t get better picture performance than you get from the CX models. So if you're looking for bang for buck, the CX is the best TV for you.

If your budget doesn't stretch to the CX, all is not lost. LG is due to launch a cheaper 2020 OLED, the entry-level BX, this year. However, it uses an older version of LG’s processor and isn’t expected to deliver the same level of performance, so you might be better off considering one of LG's 2019 OLEDs, which are available with discounts while stocks last.

After something a bit more stylish? LG's GX – or 'Gallery Series' – OLED delivers the same exceptional picture as the CX, but in one of the thinnest, neatest chassis we've ever seen. (We reviewed the 65in version – the OLED65GX – but it's also available in 55in and 77in variants).

Whereas most OLED TVs have a rear hardware enclosure that sticks out and brings the TV's overall depth up to around 5cm, the GX is just 2cm deep all over. This means it can be mounted flush to the wall – like a work of art.

Downsides? It's more expensive than the CX and doesn't come with a pedestal stand, so it should really only be considered by those who plan to wall-mount their TV. Still, if that's you and your budget stretches, we can't recommend the GX enough. The included low-profile 'no gap' wall mount, which hides all the cables, is a marvellous bit of engineering.

Elegant design aside, the GX trumps the CX's 40W, 2.2ch sound system with a 60W, 4.2ch set-up. And, despite being invisible, the GX's downward-firing arrangement delivers plenty of scale and spaciousness (with a little help from LG's clever AI Acoustic Tuning, which tailors the sound to your room).

If you're happy to pay a premium for the fancier design and upgraded sound, LG's ultra-thin GX OLED, which replaces last year's E9 series, could be the best TV for you.

LG describes itself as "the company delivering the Real 8K experience" and, in some ways, that's true. LG's ZX 'Real 8K' OLEDs (the 88OLEDZX and 77OLEDZX) will be among the first 8K TVs to brandish the Consumer Technology Association's 8K Ultra HD logo, having met the industry body's criteria for 8K TV. We've not reviewed the ZX but it was one of the most impressive TVs we saw at this year's CES.

You'll also want to factor in how long you're willing to wait for 8K content – there's (virtually) none on the market at the moment. And while 8K broadcasts are on the horizon, it might be a while before they're a regular occurrence. In the meantime, the best 8K TVs make themselves useful by upscaling content from HD and 4K to 8K, so from that perspective they're a super-sized treat.

Before you buy, it's worth remembering that even LG's flagship 88in 8K OLED has the exact same picture processing tech as the CX, GX and WX models. You do get a slightly beefier 80W sound system, but at this money, you'd almost certainly want to connect this monster set to a high-end surround sound system.

Ultimately, some may find the promise of 8K too much to resist. But if you want to go big, the 77in GX 4K OLED might be the best TV for you – it provides a similarly cinematic experience at a fraction of the cost.

While the GX has built-in speakers, the WX comes with a separate Dolby Atmos soundbar that doubles as a hub for all the TV's connections.

So which is the best TV for you? If you want the thinnest 2020 LG OLED, and don't mind the add-on soundbar, go for the WX. At just 4mm thick, the screen makes a serious statement.

The more affordable GX isn't quite as shocking thin, but it has built-in, invisible speakers - for some that will be the neater solution. It's also a lot cheaper, and so might well be the best best 4K TV to suit your budget.