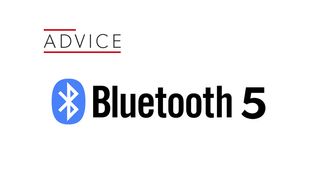 With the growing popularity of wireless headphones and wearable devices, Bluetooth is more common than ever. In fact, according to the Bluetooth Special Interest Group, which oversees the development of the technology, 14 billion Bluetooth-enabled devices will ship by 2020.

Good news, then, that the technology has just been improved. Bluetooth 5 is more powerful than ever, with enormous potential for the Internet of Things and wireless music listening alike.

So what can it do? And when can you experience it? Read on and find out.

Bluetooth lets your devices talk to each other wirelessly. When you receive a notification on your smartwatch, for example, it's come from your phone via Bluetooth.

It also lets you fire tunes to a wireless speaker so you can listen to music at home, in the park or on the beach.

This being the latest version of Bluetooth, it's a lot more powerful than its predecessors.

How powerful is Bluetooth 5?

More than powerful enough. Compared to its predecessor (Bluetooth 4.2 Low Energy), it's twice as fast, has four times the range and can transfer eight times as much data.

If you want hard stats, we're talking a bandwidth of 2Mbps. In practice, this means speedy and reliable over-the-air connectivity, leading to faster firmware updates and data uploading.

Thanks to the greater range of around 800 feet (or 240m), your wireless speakers and headphones should work much further away from the sound source than with Bluetooth 4.2 Low Energy. It also allows for whole-home coverage for Internet of Things devices like security cameras, smart fridges, smart thermostats and more.

And because of its more efficient use of broadcasting channels on the increasingly popular 2.4GHz band, it opens the way for "richer connectionless, beacon-based Bluetooth solutions", according to the SIG. In other words, expect breater wireless connectivity wherever you go, from sports stadia to shopping centres.

You can connect more than one pair of wireless headphones to a single sound source over Bluetooth 5. If your device has the right functionality, like Samsung's Bluetooth Dual Audio feature, you can adjust the volume of each independently. Very handy for sharing and journeys by train or plane.

Bluetooth 5 can also detect interference at the edges of the 2.4GHz and neighbouring LTE bands, and automatically prevent it. This should make for clearer music listening from any wireless device.

Which devices are compatible with Bluetooth 5?

Bluetooth 5 isn't a blanket standard just yet, so you'll find only a select list of devices - typically flagship phones - support it at the moment. But it's gaining support.

The Samsung Galaxy S8 was the first phone to work with the technology in 2017, followed by the bigger Galaxy S8 Plus and Note 8. They've since been joined by the LG V30 and the latest Apple iPhone 8, 8 Plus and iPhone X smartphones.

Samsung continues to fly the flag for Bluetooth 5 this year, with its recent Note 9, Galaxy S9 and S9 Plus smartphones sporting the feature.

On the headphones side, the Kickstarter-funded Anker Zolo Liberty+ was the first pair to support Bluetooth 5. And while the Apple HomePod speaker lists Bluetooth 5 on its spec-sheet, it definitely doesn't use Bluetooth to stream music, nor does it show up as a Bluetooth device. It seems Bluetooth radio is used only for the set-up process - and that's all.

So without significant Bluetooth 5 headphones or wireless speakers around, for the time being, you can't take advantage of the greater range or faster speeds just yet. But we hope to see more compatible products arriving by the end of this year.

The good news is that you can use Samsung's Bluetooth Dual Audio feature with any standard Bluetooth speaker or headphones. Just pair them with the compatible phones as you usually would, then select 'Dual Audio' from the menu in the top right of the screen.

Will Bluetooth 5 improve sound quality for wireless speakers and headphones?

Sadly not. The focus is on the Internet of Things and greater connectivity, but the SIG makes no mention of improved sound quality. That's not to say music fans won't get any benefits, however. Wireless headphones and speakers will work much further away from the sound source, and you can stream the same audio to more headphones/speakers simultaneously.

Bluetooth 5 could also improve battery life. Because it's more efficient, it'll use less energy, which should mean longer battery life for wireless speakers and headphones. But we'll have to try them out for ourselves to confirm this.