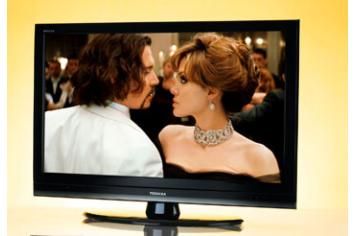 It isn’t the most thrilling performer you can buy, but this Toshiba telly is a solid candidate for fairly modest cash

It can be a little difficult to get excited about a Toshiba TV. It's not that the company makes bad ones; it's just that we've not seen a really excellent one from them in years.

The company's first 3D TV, the 40WL768, while not perfect, proves that the company can still produce an exciting set when it wants to, so we muster some enthusiasm and open the 37RV753's box.

Set-up is quick and painless
It doesn't get off to a good start, though. This is a big TV, both in terms of height and depth, and the glossy plastic finish is rather uninspiring.

Turn it on for the first time and you're guided through the setup by a menu system that's clear and sharp, but a tad let down by a peculiarly unpleasant shade of yellowy green that's used to highlight options.

Oh, and an early calibration hint: when it asks if you'd like to enable AutoView, go for ‘no'. Assuming you follow that advice, the rest of the process will involve little more than cooling down the colour temperature and lowering the backlight, and you'll soon be enjoying your first disc.

Make that disc the Blood Diamond Blu-ray, and you'll get a great deal of enjoyment indeed. What's obvious from the off is that this LCD is capable of producing seriously deep blacks, and that these add depth and lustre to the picture, which is already being made lush by the rich colour palette.

Murky and unclear
While the Toshiba can certainly produce deep blacks, it can't dig up an astonishing amount of detail from within them, and that can leave very dark scenes a little murky and unclear.

Still, the rest of the time the RV753 produces nicely detailed pictures with sharp edges and plenty of punch, and only the kind of judder you'd expect from a 50Hz TV proves a blemish.

Downgrade to the Eclipse DVD and that black depth once again proves a big plus point, here suiting the emo-goth tone perfectly.

Detail levels might not quite be up to the bold claims that Toshiba makes about its Resolution+ processor, but they are decent, and the picture is clean and stable with all but the most complex patterns.

Colours can get a bit rich
The richness of the colour palette generally equates to just a touch more warmth to skin tones than you suspect the director intended, but keeps them within the realm of believability (unlike the plot).

The bright colours of The One Show, on the other hand, are occasionally pushed a little too close to garishness, despite the coolness of the colour temperature setting, and a little excess shimmer creeps into location shots, but generally the Freeview tuner is stable and enjoyable. High-definition content is unsurprisingly sharp and vibrant.

Regardless of what you're watching, the Toshiba produces a soundstage with good width, but without real clarity or punch, leaving everything sounding a bit flat.

All-in-all, then, this is a solid telly for the money, but with a few niggles. Considering the price, that's not bad.