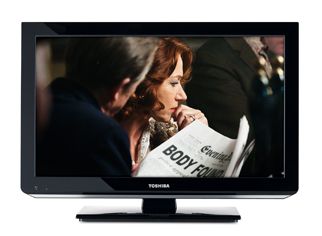 On the face of it, the Toshiba 26DL833 ought to take the concept of the Technika 26-56D – a small second-room TV with the undeniable convenience of a built-in DVD player to sweeten the deal – and bring its acknowledged expertise to bear.

In practice, that’s not exactly how it works out – and the 26DL833 doesn’t have a bargain price to fall back on.

The Toshiba starts badly and never recovers. Taking it from the packaging, we’re confronted with a small, creaky, remote with tiny labelling that’s tricky enough to read in a fully lit room.

And, turn it on and the DL833 reveals the most uneven backlighting we’ve seen in years.

Good with skin tones, at least
At least there’s only one way to go from here and, sure enough, the set serves up nicely realised textures and good levels of detail when downscaling a Blu-ray of Kick-Ass.

It does especially good work with skin tones, and handles motion well in all but the trickiest circumstances. Contrasts are weak, though, and the vagaries of the backlighting mean true black is in short supply.

And there’s a stubborn smattering of picture noise that can’t help but lower the overall tone.

The on-board DVD serves up pictures that are, inevitably, lighter on detail than Blu-ray, but they’re pleasingly composed and confidently coloured. Picture noise is endemic, though, and edges shimmer and crawl with depressing regularity.

And, of course, the backlighting’s lack of uniformity only becomes more apparent the longer you watch.

Fails to rise above adequate
All of these pros and cons carry over to TV reception – and equally consistent is the sound the DL833 makes.

It’s possibly the most coherent area of the Toshiba’s performance – in that it remains quite spacious, and slightly sibilant.

The DL833 doesn’t ever rise above adequate, so, thanks to the combination of indifferent quality control and the competence of its competition, it’s quite comprehensively outclassed by its rivals.