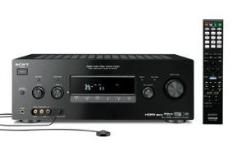 Brilliant all-rounder – this receiver will take some beating

We were blown away when we first heard this Sony receiver. Packing in 7.1-channel sound at 100W per channel, on-board decoding of all HD audio codecs and – most importantly – delivering brilliant all-round sound quality at a steal of a price.

Thankfully, this issue has now been sorted, allowing you to choose your audio signal – there's even a fresh page of instructions provided.

The box itself is hardly the most inspiring – it looks and feels like a budget AV receiver – but we were quickly won over by Sony's Digital Cinema Auto Calibration system, which is staggeringly efficient, taking a matter of seconds to accurately set the speakers. As for the remote control, it's fairly smart and intuitive to use.

Superior specification
As mentioned, all HD audio codecs can be decoded onboard, plus there are four HDMI inputs and one output, and three sets of component video inputs. The receiver also includes one coaxial and three optical digital inputs.

There are a couple of omissions: there are no multichannel analogue inputs and it can't upscale or upconvert video content, but we don't consider this to be crucial.

For all this talk of specifications, sound quality will always be most vital – and this Sony delivers in great big bucket loads. Watching the BD of Fantastic Four: Rise of the Silver, sound sweeps around the room with impressive scale and reach.

While it's initially perhaps a touch leaner than the Onkyos, the greater insight is noticeable, as are improved dynamics.Listen to a DTS-HD Master Audio soundtrack, as provided by Mamma Mia!, and the music has rhythm, timing and punch, with the Sony's speed and agility really coming into its own, while bass notes are both deft and tight.

The level of performance with two-channel audio is a real bonus at this price-point and makes for a budget machine that's nigh-on impossible to quibble with.