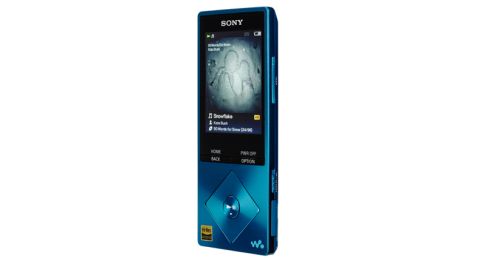 Just a few years ago, it looked like the market for stand-alone music players was finished. The increasing popularity of phones, and the use of them as music devices, had wiped out most of the breed. Even Apple felt compelled to kill off its iconic iPod Classic.

It turns out that the end wasn’t nearly as imminent as we thought, and a steady trickle of new products suggest there may be a recovery of sorts, particularly if high-resolution audio replay is on your radar.

Where does Sony’s NW-A25HN fit in? While not cheap, it’s one of the more affordable of this new breed of player. It’s a decently specified unit and will play most file types – FLAC, WAV, AAC and Apple Lossless among them – up to a resolution limit of 24-bit/192kHz.

While not a deal breaker, we’re surprised at the omission of DSD replay. Sony has long promoted this single bit file format, so it seems strange that one of its latest high-resolution players won’t handle it.

Start handling the NW-A25HN and you’ll notice decent build quality but also the lack of a properly substantial feel. That comes as no surprise because the unit only weighs 66g – lightweight usually trumps solidity for portables.

It’s small too, measuring 109 x 44 x 9 (HWD) mm, and so should fit into most pockets or bags without issue. There’s a choice of colours for the metal body – black, pink, red, blue and yellow finishes are available.

The controls are fairly responsive but lack a quality feel. We don’t find them wholly intuitive in use either, though familiarity improves things to a point where we don’t find ourselves getting overly annoyed.

The Sony’s LCD display isn’t particularly big at 2.2 inches, but it has a resolution of 320 x 240 pixels and looks reasonably crisp.

While the NW-A25HN will play videos and show photos, the screen is too small to make either a truly entertaining experience, making this player a music machine first and foremost.

There’s 16GB of memory built-in, with the option of adding more by using a microSD card. If that isn’t enough, Sony makes a 64GB version of this player called the NW-A27HN which costs around £100 more.

Battery life is good. It takes around four hours to get to full charge and playing time is around 30 hours for high-resolution source material. That figure goes up to around 50 hours for low bit rate MP3 replay.

Pretty impressive, but these figures will take a hit if you start using the unit’s noise-cancelling function. It only works when you use the supplied in-ears (or one of Sony’s dedicated models) and brings down ambient noise to a decent level.

The reduction isn’t as notable as the very best noise-cancelling headphones manage but it’s a useful amount.

There are various adjustments to optimise the noise-cancelling performance for the - environment you’re in – office, train, bus and so on – but we ended up using the general setting most often.

There’s a choice of sound modes and equalisers too. We preferred the results with them turned off, but the ClearAudio+ adjustment (more expressive dynamics and top-end bite) and DSEE HX (improves sound from lower resolution recordings) are both worth a try.

This Sony delivers a precise and agile sound. Regardless of source material it digs up a good amount of detail and organises it in a neat and stable fashion.

Tonally, things are pretty even, though, as is typical for Sony, a degree of authority has been traded for improved clarity.

We like the insight the player gives into Kate Bush’s distinctive voice. There’s a lovely sense of texture here and a good degree of expression. The backing instrumentation on Wild Man is delivered with a pleasing amount of energy and punch.

There’s subtlety here too, as a listen to the Mozart Piano concerto shows. The Sony stays composed as the music becomes complex and never sounds edgy or harsh, unless the recording suffers from these things in the first place.

The NW-A25HN isn’t the most dramatic listen though. Rhythmically it doesn’t quite have the drive to truly excite, while dynamic reach feels just a touch restrained.

These shortcomings aren’t massive, but they are enough to stop this unit from claiming an unreserved recommendation.

The supplied headphones are better than usual. Compared to the likes of SoundMagic’s E10S (£40) they aren’t as informative and don’t have the same free-spirited way with dynamics, but aren’t a notable hindrance to the player’s performance. Let’s not forget that they offer noise-cancelling capability too.

We try the Sony with FM radio and are pleased. Provided you can get a strong enough signal, the results are good. Hiss levels are acceptable and there is a nice degree of insight.

We play with the NW-A25HN’s Bluetooth feature, sending the sound to a Chord Hugo DAC (for fun) as well as B&W’s lovely Zeppelin Wireless. We’re impressed. The connection shows more refinement and solidity than we’d expect.

The NW-A25HN is a likeable unit. While the ergonomics could be better it’s packed with features and sounds good too. If you’re in the market it’s certainly worth investigating.

See all our Sony news and products