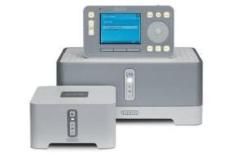 We called it ‘a work of genius’ when we first encountered it, and that still just about covers it

When we first reviewed it in our September 2005 issue, we were so impressed we called it ‘the hottest thing to hit hi-fi in years'. Now, after a series of upgrades and price cuts, it's still good enough to win an Award for best wireless music system.

The chief difference between Sonos' approach and that of other wireless kit is this package doesn't have a hard-disk - it's designed to be used with an existing computer, which can be either a PC or Mac. You can also run it from a networked storage device, such as the Buffalo Terastation.

Zone players form wireless network of sound
The core components in the BU130 bundle are the ZP100 and ZP80 Zone Players. The former is an amplifier and wireless connector: plug your computer and a pair of speakers into it, and you have an instant sound system.

Not only that, it'll wireless beam the music to any other Zone Player, such as the ZP80 also included in the BU130 package. This latter unit doesn't have amplification built-in, but attach it to an existing sound system (hi-fi or powered speakers), and you have an instant two-zone wireless sound system - easy!

If you want to add more ‘zones' to your Sonos system, you'll need to buy more ZP100s (£350 each) or ZP80 (£250). The 50w digital amplification of the former won't knock down walls, but at sensible listening levels, it sounds good.

If you want more oomph, use a ZP80 and the sound system of your choice via line level or optical/coaxial digital audio outputs. There's scope for adding up to 32 Zone Players in a multiroom set-up.

Flexible and individual
Sonos markets its own SP100 standmount speakers (£130) to partner the ZP100, but as long as you opt for easy-to-drive speakers - for instance, budget offerings from Q Acoustics or Tannoy - you can choose your own.

So, after a few simple set-up steps, you can be distributing all the digital music stored on your computer to as many zones as you need.

The Sonos supports a massive range of music formats. Even high-quality Apple Lossless is supported, though if you want to play tracks purchased from iTunes, you'll have to cheekily burn them to CD, and re-rip them to avoid DRM issues.

The upgradeability of the Sonos system also should be mentioned - from functionality-boosting firmware upgrades that can be automatically installed when the Sonos is online, to new services (such as a deal that allows you to stream all of Napster's music content), this is a system that doesn't date.

Sonos has created a magic wand of a remote control
The Sonos system is a joy to use, and we haven't even mentioned that glorious remote: the CR100 controller is the jewel in the Sonos' crown. It's a chunky, rechargeable, iPod-esque magic wand that's just plain glorious to use, from its thumbwheel controller to its full-colour screen.

It's just another reason why we love the Sonos – and if you try one, we're certain you will, too.