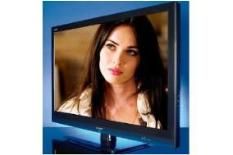 The Sharp can’t match class-leading screens, yet still produces a likeable image for a fair price

When we first reviewed this TV back in December 2009, we were pleasantly surprised.

A four-star rating pointed towards better times for the TV manufacturer after a string of rather lukewarm reviews.

But a few months is an eternity in TV land and any TV is essentially a sitting target for rival manufacturers. Is the Sharp still up to the job?

Bland looks hide techno goodies
On the face of it, the Sharp is a rather subdued-looking set and compared with glitzy, slimline rivals, it looks decidedly dull and uninteresting.

Matters aren't helped by a remote control that looks dated, feels cheap and has to navigate through uninviting on-screen menus that would look more at home on a PC monitor.

But the Sharp still has its fair share of technological goodies, not least of which is its ‘full-array' LED backlight with local dimming.

This 10-bit panel also features 100Hz motion processing that, although not perfect, nevertheless does a good job of controlling smearing and judder without giving the image the alarmingly artificial look that is
a feature of some rivals.

Subtle and understated
If you plump for the Sharp you'll be getting an overall picture that's subtle and understated. Images don't have the punch of the best, nor are blacks as deep and luscious, but there's something remarkably endearing about how the '40LE700E performs.

The TV tuner produces a picture that majors in stability and is more than a match for the Freeview HD tuner in some closely priced peers.

Spin a Blu-ray or DVD and, once again, the Sharp goes about its business in a professional manner.
The Blu-ray of Lord of the Rings: The Fellowship Of The Ring is a great tester and, to its credit, the Sharp handles the film comfortably enough.

That said, it can be beaten by other sets in terms of absolute detail and its picture doesn't have quite the same sense of clarity as the top TVs on the shelves.

Of course, when we originally reviewed the Sharp, the new sets from the class-leaders weren't on our radar. Now that we've seen them in the flesh, we've had to alter the Sharp's star rating accordingly