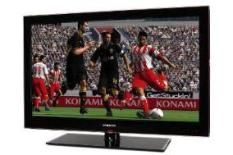 The combination of looks, specification and performance means this Samsung elbows its way on to the top table

And if you want a screen to be well specified (twin tuners, four HDMI inputs and DNLA capability for integration into your wireless network), the Samsung stays firmly on your radar.

In fact, we're hard-pushed to think of a reason why you shouldn't seek out the LE40A856 at the earliest opportunity. It's got all the bases covered.

The 'rose-black' finish looks good every time we see it, build quality is the equal of anything around at the price, and the specification is exhaustive.

A performance to match the looks

Most importantly, the Samsung serves up impressive images. Displaying a Blu-ray of No Country For Old Men, the depth, lustre and outright blackness of the blacks the '856 delivers is striking – especially as these inky tones aren't at the expense of low-light detail.

The overall colour palette is rich and believable, whites are bright and clean, skin tones are convincing. Motion is tracked assuredly, edges are cleanly drawn, and even pull-focus shots remain detailed and composed.

Step down to DVD and the Samsung retains all of its virtues, with only some fully expected picture noise the giveaway vice.

Add in sound of the thin-but-not-hysterical kind and an aggressive price tag, and the Samsung's a compulsory audition. It's not short of rivals, but the LE40A856 looks capable of competing with the best around.

Listen to our March 2009 TV Supertest podcast to find out more about this TV.