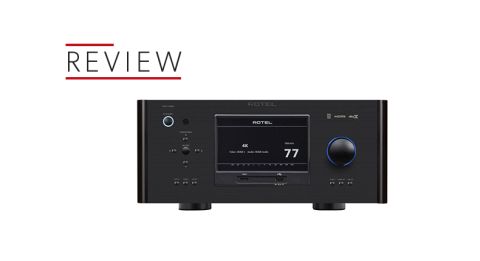 Safe to say we haven't been deluged with Rotel home cinema products lately. If a week is a long time in politics, eight years is an eternity in home entertainment technology - yet our last test of a Rotel AV receiver dates from 2009. Which goes some way to explaining how pleased we are to have laid hands on Rotel's brand-new multichannel amp: the RAP-1580.

There are no real suprises here. Just as it's hard to break away from the visual template of home cinema amplifiers (because of all that's going on inside), it's hard to deliver an expensively specified home cinema amp that isn't heavy enough to stun an ox. The RAP-1580 tries its best to hide its bulk - those curved edges help here - but it's not going to pass unnoticed on your equipment rack.

Rotel's home cinema products haven't always existed at technology's cutting edge, but the RAP-1580 is lavishly specified. Which is as it should be when you consider it's priced at £3400.

Power, for example, is delivered by oversized toroidal transformers developed and manufactured in-house. The quoted output (seven channels of 100 watts each at 8 ohms impedance) isn't remarkable unless you look at the details. That seven-channels-driven, continuous power figure is delivered with less than 0.05% distortion.

There are six Wolfson WM8740 24bit/192kHz DACs on board, capable of independent processing for up to 11 audio channels. They're supported by more of Rotel's in-house engineering: the Wolfsons' internal filtering is bypassed in favour of bespoke external low-pass filtering.

Sound processing is courtesy of Texas Instruments and goes as far as Dolby Atmos 7.1.4 and DTS:X.

The back of the RAP-1580 features 8 HDMI inputs, all of which are 4K compliant and three of which are HDCP 2.2, HDMI 2.0a and 10bit HDR compatible. There are two HDMI ouputs.

Around the front there's a 4K HDMI input and a USB socket with iOS device charging. These sit beneath a 7in TFT full-colour display - alternative forms of control are via remote handset or app.

Our initial impression is one of rigorous control. The RAP-1580 is capable of convincing low-level dynamics, handles the crash-bang-wallop so beloved of home cinema demonstrations the world over with a sort of unflappable grip, and goes out-and-out loud without any noticable change in its tonal character.

That tonal character seems to be pretty neutral. All the midrange detail so crucial to giving a voice character is fully served up, and with what sounds like minimal colouration.

The soundfield is wide and (with Atmos-soundtracked content) tall, and effects are steered convincingly around it. Effects location seems solid throughout our listen, in fact.

On first acquaintance, the RAP-1580 isn't a grab-you-by-the-lapels barn-burner of an amplifier. It's a more measured and sophisticated listen than that. But its control, implacable low-frequency attack and eloquent detail retrieval mean we can't wait to get it into our test rooms and get its true measure.

MORE: Read all our Rotel reviews