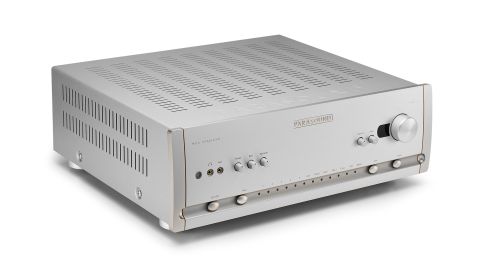 The HINT 6 is a fine amplifier that’s well equipped, but it’s up against some tough competition

After spending more than three decades in the amplifier business you’d think Parasound would have made more than two just models of integrated amplifier. The first was launched as recently as 2016, to a great reception, and its replacement, the HINT 6 (£3300/$2995), is on test here.

The HINT 6 is an evolution of that original Halo integrated amplifier, which cost £2700 at launch, and gets enough of the technology from the company’s brand new P6 preamp to get part of its name.

In the world of hi-fi amplifiers, lots of features often means a compromised sonic performance. That’s why we’ve had decades of purist amplifiers that have sported little more than source selection, a volume control, and a remote if you’re lucky. But thanks to better technology and improved design, things are changing. That original Halo one-box proved an extensive feature list and a great performance weren’t mutually exclusive, and this new one simply confirms the fact.

The HINT 6 follows the original’s template to the letter, boasting the same wide range of facilities. There’s a built-in digital-to-analogue converter with USB, coax and optical digital inputs. The USB input is compatible with PCM files of up to 32-bit/384kHz and DSD256.

The other digital inputs are limited to 24-bit/192kHz PCM, which should still be more than enough to cope with the most common files. The number crunching is done by the highly regarded ESS Sabre 9018K2M chip that is regularly used in a variety of higher end digital products.

Things aren’t just geared towards digital, as is becoming increasingly fashionable the HINT 6 also caters for record players. Built into that sturdy chassis is a switchable moving magnet/moving coil phono stage. This is much the same design as that fitted to its predecessor, but offers slightly more gain.

The moving magnet input changes from 35dB to 41dB, while the moving coil’s gain goes up by 2dB to 54dB. The latter input has a choice of cartridge loading options – either 100ohms or 47kOhms – to help optimise performance from your deck.

Take a look inside the Parasound and things are mostly unchanged. That’s no bad thing. Its power supply is generously specified and power output is a healthy 160W per channel into an 8 ohm load. That rises to 240W per channel as impedance halves, which is enough to drive most speakers to high levels in most domestic situations.

But for even more in the way of sonic authority, there are two options. You can either take advantage of the Parasound’s preamp output and add an outboard power amplifier to bi-amp, or make use of the dedicated subwoofer output. Amplifier matching is easy thanks to a dedicated rear panel control that will help to compensate for different gain levels between the two amplifier sections.

The most obvious electrical difference between the old and new version is the use of a different type of volume control. The HINT 6 features a Burr Brown analogue resistor ladder, whereas the original used a conventional potentiometer. The new design is claimed to give improved channel separation and balance.

The Parasound’s build quality is what we would expect at this level. The casework feels solid and general levels of fit and finish are good. We particularly like the feel of the volume control, which spins smoothly on ball bearings.

Our only slight criticism is that we would have liked more space between the smaller control knobs. At the moment it feels a little cramped when changing input, using the tone controls or adjusting the balance. Beyond that, the remote could be classier, though at least it’s simple to use.

We give our sample a few days of use before listening seriously, and it sounds much like the old one, which is no bad thing. This is a confident and enthusiastic amplifier, one that’s as happy charging along with Stravinsky’s The Rite Of Spring as it is tip-toeing through Found Songs by Olafur Arnalds.

There’s plenty of detail here and enough in the way of organisation to arrange it in a musically cohesive way. We like the Parasound’s ability to follow individual musical strands, yet still be able to tie things together coherently.

Given that generous power output it would have been a surprise if the HINT 6 didn’t deliver Stravinsky with plenty of passion. It tracks the piece’s dynamic sweeps with conviction and never sounds stressed, even when pushed to high volume levels. There’s plenty of agility here and a pleasing degree of precision when it comes to defining the leading and trailing edges of notes.

Tonally, the Parasound HINT 6 is open and even-handed, and able to convey the different tonal textures of instruments well. Bass is deep and tuneful, while the midrange is pleasingly articulate. Highs are crisp without veering towards harshness and aggression.

The story remains positive through the phono input. Here, much of the fine character of the HINT 6’s line inputs is preserved. This is a lively presentation that’s just fun to listen to, but there is a reduction of outright transparency and dynamic expression. It’ll be fine for most people, but if you’re a hardcore vinyl addict, a dedicated outboard unit such as the Rega Aria or even Cyrus’s Phono Signature will sound better.

We like the way the digital inputs perform too. Their sound is a little thinner and less substantial than through the line inputs, but when it comes to detail resolution and thrill of listening there isn’t much to complain about. This is a good DAC section, one that’s as happy with the 24-bit/192kHz of Hans Zimmer’s The Dark Knight Rises OST as it is a tidal stream of Neneh Cherry’s Broken Politics.

Listening via the headphone output, we are pleased to report that it keeps most of the good characteristics we hear through our ATC SCM50 speakers. We listen with both the Beyerdynamic T1s and Grado’s legendary RS1s and find small shortfalls in dynamic expression and punch compared with the speaker outputs, but are happy with the overall detail, tonality and precision of the sound.

Good as this amplifier is, the sonic improvements over the original seem incremental at best. If the price of the HINT 6 had remained broadly similar, that wouldn’t be an issue. But with a substantial increase, the amp finds itself at a notable disadvantage when compared with rivals such as the Award-winning Roksan Blak (£2800).

The Parasound is better equipped and has a more open and dramatic presentation. The Roksan counters with better focus, greater authority and a more tactile handling of rhythms. It’s not that the HINT 6 has flawed timing, more that the Roksan sounds more surefooted and precise, and so conveys the changing momentum of music better. Then there’s that £500 price difference.

The HINT 6 remains a fine amplifier, though by staying so close to its predecessor’s recipe and going up in price significantly, it has opened the door for rivals to step into the limelight Parasound once held.