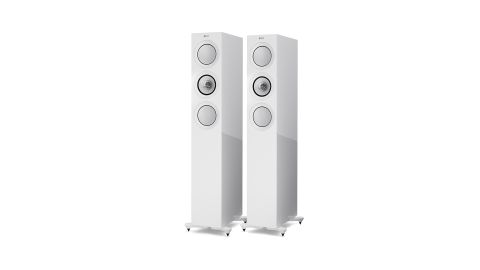 The R5s are capable performers, but they're up against some excellent rivals as well as a hugely capable sibling in the R3

KEF has been on quite some run in recent years. From class-leading active stereo speaker systems to our current Product of the Year in the passive speaker category, it seems the company can hardly put a foot wrong.

On paper at least, the R5s look like another sure-fire hit. How could they not be when they share the R3's engineering DNA but wrap it in a slim, floorstanding package that will appeal to many?

These are superbly made towers with great care taken with both fit and finish. We can’t think of a rival that goes as far as to colour co-ordinate the drive units to match the cabinet finish. Or one that has such well designed grilles that the sound of the speakers barely changes when they’re left in place.

Those magnetically-held grilles deserve a special mention. Rather than the usual MDF or moulded plastic frame, KEF has used no less than 13 layers of microfibre to create something that feels more like suede. It’s an unusual material and we like it.

The attention to detail extends well beneath that smart exterior. That solid cabinet – available in white gloss, black gloss and walnut – is a carefully reinforced structure that uses constrained layer damping between the internal braces and cabinet panels. The aim is to create a low resonance and solid platform for the drive units to work from.

The use of a Uni-Q driver array (where the tweeter sits in the centre of the midrange driver) is hardly a surprise. KEF has used this technology for decades, citing more consistent dispersion characteristics and improved integration as advantages over the conventional separate arrangement.

The Uni-Q used in the R5 is the 12th generation of this array, which now has a completely redesigned motor system for the 12.5cm aluminium midrange unit and the addition of a damped cavity behind the 25mm aluminium tweeter to reduce the effects of the necessary gap between the two drivers at the front.

That trim around the Uni-Q isn’t just to make things look neat either. KEF calls it the Shadow Flare and it’s shaped to reduce the diffraction effect of the cabinet edges on the array’s output.

A great deal of work has gone into those twin 13cm bass drivers too. Their cone is a two-part structure where a shallow concave aluminium skin is grafted onto a paper cone. The idea is to obtain the best balance of rigidity, low resonance and weight. The motor system and suspension have also been honed in a bid to reduce distortion and improve precision.

Two rear firing ports tune these bass drivers. These ports are flexible rather than rigid to reduce any longitudinal resonances that could add distortion to the midrange output of the speakers. It’s something that was originally introduced in KEF’s LS50 standmounters years ago and seems to work well.

These ports can also be totally or partially blocked with supplied foam bungs, which can be handy if the speakers’ low-end output threatens to overwhelm your listening room.

We don’t need to use the bungs in our medium-sized test room, instead we place the R5s away from the rear and side walls with a slight angle towards the listening position. The result is a weighty but well judged tonal balance and a solid stereo image. In recent years KEF has truly mastered the art of producing speakers that are so well balanced that they perform close to optimally without too much fuss.

While the R5s have the resolution and transparency to thrive at the end of our reference Naim ND555/555PS streamer and Burmester 088/911 pre/power set-up, they sound equally at home (though obviously not as good) with more modest electronics.

Given a few days to settle, the R5s turn in a good performance. Despite their slim proportions these speakers still manage to deliver a powerful and authoritative presentation.

Feed them some large-scale classical music in the form of Holst’s Jupiter and the R5s have no trouble generating high volume levels with impressive composure. They sound so refined, clean and composed when pushed that there’s always a temptation to go higher, which is great as long as you have understanding neighbours.

We’re impressed by the R5s' stereo imaging. They deliver an expansive but superbly focused soundstage, one that locks sounds and instruments in place even when the music becomes complex. The use of a Uni-Q arrangement means that the imaging stays coherent even when we’re not in the optimum listening position, which is something to bear in mind if you don’t like to be locked to just a single listening spot.

Tonally, things are full-bodied and even. The integration between the drivers is seamless and there’s a consistency of sonic character from the lowest notes upwards that isn’t always a given with rivals.

Large-scale dynamics are handled well with the KEFs generating a good amount of punch when required. This is something that comes to the fore when we play Bruce Springsteen’s rockier retake of The Ghost Of Tom Joad from the High Hopes set. There’s a good amount of attack and enough drive to keep us interested, but there’s also a sense that the speakers aren’t quite as exciting and entertaining a listen as they could be.

The R5s are polished performers but further listening to the likes of Jay Z and Kanye West proves that they’re not the last word when it comes to rhythmic precision or the ability to express dynamic nuances with conviction. Rivals such as ProAc’s Response DT8s (£1999) or Spendor’s A4s (£2300) may not match the KEF’s modern aesthetics, impressive engineering content or sheer sonic scale but they do a better job of conveying the musical message.

Given that we’re such huge fans of the R3 standmounters (£1300) we’re curious to find how the siblings compare – there isn’t a massive difference in price once the cost of good stands is factored into the equation.

It doesn’t take long to realise that the R3s deliver a clearer and more expressive performance. They may lack the muscle of the floorstanders, but to our ears they produce the more appealing sound.

If you like what KEF does, then it's the R3s that we'd buy. But if you must have towers, then the R5s remain a good proposition.

While we prefer the best of their rivals there’s still enough in the way of sonic talent and smart aesthetics in the R5s to make them worthy of serious consideration.

Read our Spendor A4 review