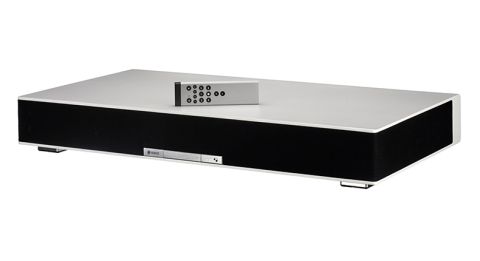 Ambitious features and good looks, but you can get better performers for half the money

When it comes to markets as saturated as the TV-sound-boosting one, Raumfeld clearly knows the importance of making a killer first impression.

The Raumfeld Sounddeck soundbase – the sibling to the German brand’s slightly pricier soundbar – is a real head-turner – and for a product that, design-wise, is as inherently bland as the costume department of Spotlight, that’s saying something.

Just hoisting it out of the box is enough to tell that the Sounddeck is made of solid stuff. It’s sturdy enough to provide a perfect pedestal for any TV within the deck’s 73cm width and 41cm depth dimensions.

The laminate-smooth matte white (or black) lacquer is tastefully garnished with brushed metal accents, mirrored in the plush aluminium remote, which would be a satisfactory accessory for a product three times this price.

A black cloth grille hugs the front and sides, behind which are two side-mounted and four front-facing 7cm drivers. Two downfiring 13cm subwoofers supply the grunt from underneath the unit, so take care not to poke them during set-up.

Around the rear, there are HDMI, optical, USB and RCA inputs – as well as an Ethernet port (and wi-fi) to hook it up to your network.

MORE: How to choose the right soundbar for your TV

Like the Sonos Playbar (£579) and the LG MusicFlow soundbars, the Raumfeld Sounddeck goes beyond its call of (TV) duty.

Via its iOS or Android control app, it supports streaming from a host of music services including Spotify, Tidal and TuneIn Radio. Google Cast, Qobuz and Deezer are due to arrive later in the year.

While that can only be good news for avid streamers, it does mean that Bluetooth, a common tick-box for soundbases, has been left off the list.

Not your first Raumfeld product? The Sounddeck is part of the brand’s expanding multi-room ecosystem too, so it can connect to a range of wireless speakers.

If you want to make the most of the network features, the app is a good place to start. Follow the on-screen steps, which involves using the remote and Sounddeck controls, and you are up and running in a few minutes.

It’s intuitive enough, and lets you access apps and files (up to CD-quality) locally and on NAS drives, as well as build playlists and perform volume controls. Four preset buttons on the physical remote act as shortcuts so holding one down while a song is playing will log it for easier future access.

There’s room for improvement: being able to switch across all inputs would be handy, and Spotify integration would be preferable to being redirected.

The former offers the most tonally balanced, focused listen. Sadly, it’s just not a competitive one. But let’s stick with the positives first.

The Raumfeld kicks out sound far and wide to the very corners of a room, the two side-firing drivers doing their bit to create an expansive spread.

There’s the heft and solidity that you simply don’t get anywhere near from standard TV speakers, and a good deal more punch too. More volume? For sure, you get that two-fold.

But the problem is that plenty of soundbars and soundbases half the price of the Raumfeld Sounddeck also meet their promises, and in the face of competition it doesn’t do nearly enough to defend its higher asking price.

In Edge Of Tomorrow, starring Tom Cruise, there’s more than enough low-end groan as the aircraft chugs along to battle, but it’s crudely delivered, with both the Geneva Model Cinema (£550), and the Dali Kubik One (£799), resoving more bass detail.

The spaciousness and precision demonstrated by the Dali, necessary to separate information and present it in cohesive, articulate layers, is missing in the Sounddeck. Instead, detail gets lost in a presentation that feels somewhat mashed together.

Gunfire doesn’t splice through the soundfield as it should, there’s a lack of impact as metal suits collide with each other, and dynamics feel largely sat-on; there simply isn’t that sense of urgency or excitement to the soundtrack, nor the punch to get properly stuck into action sequences.

It’s the kind of presentation that might cause your mind to wander back to last night’s episode of EastEnders.

While midrange projection is fine – voices come through loud and clear – the Sounddeck can’t quite get the level of expression of rivals. We’d like more insight too, and that extends up to the restrained treble too.

Past its good first impression – formed by good looks and a desirable spec sheet – the Raumfeld Sounddeck doesn’t really have much to fall back upon.

At £800, it needs to be a standout performer, which it fails to be even amid rivals half its price.

See all our Soundbar reviews