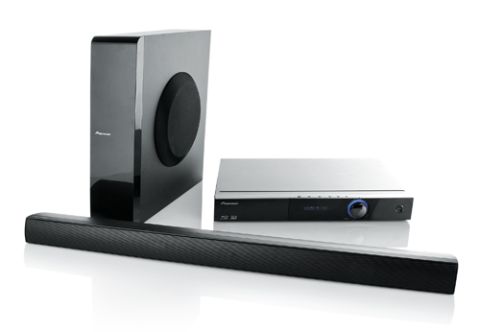 A desirable option with great features, but faces stiff competition from cheaper rivals

At £400, this Pioneer BCS-SB626 is one of the more expensive soundbars, but the extra cash buys you the only unit packing an integrated 3D Blu-ray player.

As an introductory upgrade to your TV, this neat all-in-one is a great option. The Pioneer is a tripartite system consisting of a sleek and subtle soundbar, a combined amplifier and 3D Blu-ray player, and a 250W passive subwoofer.

To play media from portable devices, you can use the 3.5mm input, stream wirelessly via Bluetooth, or use the separate iPod/iPhone cradle (30-pin connectors only).

There’s also an FM tuner, and a mic input for, erm, karaoke. The features don’t end there, either, with the Pioneer boasting internet connectivity too.

Pioneer BCS-SB626: Performance
But it’s not all just bells and whistles – the performance more than matches the feature count. The sound is well balanced, with confident dynamics filling a good-sized room with engaging sound. There’s bags of detail, with dialogue in particular being delivered with plenty of expression and character.

There’s also ample punch and weight when it comes to demanding action scenes, and a good dispersion of sound.

To test the integrated Blu-ray, we played the BBC’s visually stunning Sherlock, and the Pioneer confidently renders images with dynamic colours and crisp detail. HD videos on YouTube look good and fairly noise-free. But it could do with more clarity to match class-leading separate Blu-ray players.

On the downside, the Pioneer system can be fiddly, with the control buttons and disc-loading tray operating with inconsistent responsiveness. Plus the LG NB3520A offers that extra ounce of subtlety and spacious sound – and at almost half the cost, too.

Pioneer BCS-SB626: Verdict
So while the Pioneer’s a desirable player with some great features, it falls short ergonomically, and faces stiff competition from budget alternatives for outright performance.