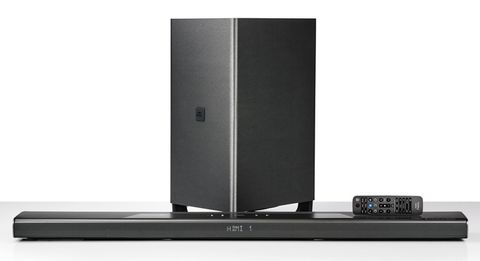 The Skyquake puts decent sound above you, but it could still be more refined, insightful and exciting

We all want more immersive sound, but the pleasure of sitting in the middle of a cinema and hearing sounds above and around you can be difficult to achieve in the average living room.

Recreating the cinema effect often means spending a lot of money on in-ceiling speakers or an impressive sound-reflecting upward-firing Dolby Atmos package. Philips’ Skyquake soundbar and subwoofer combo (also known, rather less dramatically, as B8/12) aims to make the process easier and cheaper.

This Dolby Atmos soundbar has speakers on its top that fire sound upward, to create a three-dimensional sound. You shouldn’t expect total, surround-sound immersion (there’s no sound behind you), but it is a step or two closer to the cinema experience.

The Dolby Atmos soundbar market is becoming increasingly competitive, and the Skyquake is up against rivals such as the Samsung HW-K850, and the more expensive Yamaha YSP-5600 and Sony HT-ST5000.

And, as if that’s not enough competition, Philips’ soundbar also goes up against the non-Dolby Atmos Dali Kubik One, our Award-winner at this price point.

We load up John Wick on Blu-ray (one of 70 or so discs with a Dolby Atmos soundtrack) into our reference Oppo UDP-203 and connect it up to the soundbar.

We set the ‘Height’ setting to High (the Skyquake’s other options are ‘Medium’, ‘Low’, and ‘Off’) to get the most out of the ten up-firing drivers. There are also eight front-firing speakers, and the sound that comes out is generally pleasant.

Sure enough, as Wick walks into a club-cum-criminal base, set on taking revenge on the Russian syndicate who killed his dog, the Skyquake places the sound of the thumping club music higher up.

It’s not quite above you, as it would be with in-ceiling speakers – it sounds more like it’s coming from above the top of the television – but it’s definitely more immersive.

When Wick violently eliminates the criminals, the sounds of shattering glass and bullets ricocheting off walls are placed precisely, and the wide tracking of an escaping car moving from the right channels across to the left is an enjoyable experience.

The bass beats in the club scene have enough depth to them, feeling suitably weighty as they bounce along.

That quality remains across its other inputs too. Using an optical cable to play Gravity, the tense low-frequency soundtrack is handled with commendable punch by the 20cm driver in the subwoofer (which we’d recommend placing near the soundbar to get the best integration).

It doesn’t push those low frequencies forward, either, keeping a balanced tone no matter what you’re playing.

Unfortunately, the other sound elements delivered by the Skyquake are a little lacklustre. It’s not a bad sound, it’s just not great. The midrange is listenable, free of any harsh edges, but there isn’t enough richness or insight to really convey a scene’s emotion - and it’s not particularly crisp either.

In Fargo, when Carl Showalter (Steve Buscemi) snaps at Gaear Grimsrud (Peter Stormare) for his silence during their lengthy car ride, you don’t get the same irritation in Buscemi’s delivery, or contempt in Stormare’s response, the Dali Kubik One can describe.

There’s room for improvement dynamically, too. We use the Skyquake’s aptX Bluetooth connection to stream Old Friends from The Hobbit – An Unexpected Journey soundtrack, but the rapid rise of harmonies in the climax needs a little more vigour and the force behind the little patter of hand-drums is a bit weak.

If you still like the Skyquake proposition, you shouldn’t have much trouble fitting it in your living room.

Physically, one of the benefits of the Skyquake is that it’s pretty compact – at 105cm long it will take up less space on your TV stand or wall than either the Samsung HW-K850 or the whopping 110cm long by 12cm high Yamaha.

Set-up is straightforward: just press the ‘Connect’ button on the back of the sub to pair it with the soundbar. Connecting via Bluetooth, which involves holding down the corresponding button on the remote, is simple too.

It’s a nice touch to have that functionality on the remote - other soundbars require hitting a button on the product itself. There’s also NFC pairing for compatible Android phones.

The Skyquake’s remote is elegantly designed, with dedicated input buttons along the top for quick source-switching. There are also buttons for bass and treble adjustment, which shows up on the soundbar’s LED screen, and a Night Mode that compresses dynamic extremes on Dolby Digital soundtracks.

There are also three ‘Ambisound’ settings: 'Movie', which aims for maximum immersion according to Philips; 'Music', which is set for more precise instrument placement; 'Voice', which boosts midrange dialogue. The bar automatically changes between modes when you hit the Smart button on the remote.

'Voice' mode sounds a little unnatural, but switching between ‘Music’ and ‘Movie’ when you’re alternating between films and songs does make a difference. We’d recommend keeping the Skyquake on ‘Smart’.

Input-wise, there are nearly enough connections: optical, coaxial, a 3.5mm jack and a USB port for MP3s. It’s also worth noting that, while the Skyquake will process sound from other inputs through its upfiring speakers, only sound through its HDMIs will be true Dolby Atmos.

With that in mind, you get two HDMI inputs and one HDMI ARC output supporting 30fps 4K passthrough. Ideally we’d like another HDMI input, as those with separate Blu-ray player, set-top box and games console will be stranded.

Moreover, the HDMI output is only of the 1.4 standard rather than the modern 2.0 variety. It doesn’t support HDR, so you’ll be limited to an 8-bit colour range.

This might not be essential, but if you’re spending £900 on a soundbar you may well be thinking of pairing it with a 4K HDR television. Missing out on that colour-rich content could be a dealbreaker for those considering this piece of kit.

For Dolby Atmos sound without installing ceiling speakers, the Skyquake B8/12 is a reasonable option – but this soundbar doesn’t deliver the best sound quality at its price.

Those looking for a conventional soundbar should head for the Dali. Or, if your heart is set on Dolby Atmos, you'll need to pay the (admittedly considerable) premium for the Yamaha YSP-5600 or Sony HT-ST5000.