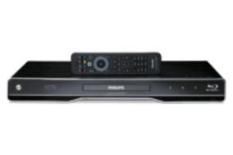 Philips has been enjoying great success on the TV front of late. But after every test victory, more often than not we find ourselves recommending a Blu-ray-playing partner from a rival manufacturer.

It would be nice to be able to offer the synergy of an all-Philips package, but the company's recent models haven't quite been up to the job.

An attractive proposition
First impressions of the BDP7500, however, are extremely promising. The styling of this unit is a cut above many players off the shelf. The Philips is wrapped in a brushed aluminium, smooth-edged chassis.

The sophisticated styling is complimented by a glossy, mirror-finish fascia, complete with touch-sensitive controls. There's a USB input on the front, which blends in nicely with the rest of the panel.

The on-screen menus are a little over-the-top in terms of graphic size, but the sub menus are clear and there's a satisfying click from the D-pad on the remote handset.

As for specification, it's good for the money: there's 1GB of internal memory and a set of 7.1 multichannel outputs. The unit can handle WMV, DivX Ultra, and Xvid files, but the lack of DLNA certification means you can't stream content from DLNA friendly products.

Rich and vivid colours
Up and running, colours appear rich and vivid – a quick spin of Elton John's Live at Madision Square Garden Blu-ray paying testament to that.

Switching to The Shining's notoriously difficult-to-handle opening credits shows that motion doesn't cripple the Philips, although there are rivals that are smoother.

The picture remains fairly noise-free and skin tones look realistic but, once again, more capable peers have the edge when it comes to fine detail and overall sharpness.

Audio performance? Movie soundtracks are committed and full-bodied, with good bass extension where explosions are concerned.

But spin a musical number such as Elton John's I'm Still Standing, and while enjoyable, the Philips can't quite match the very best for timing and clarity.

The BDP7500 is unquestionably one of Philips' better recent Blu-ray players.

Its problem is the competition is one step ahead and has managed to take performance to the next level.