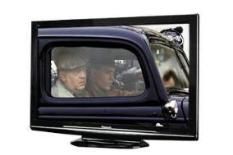 Given that the prices of the two Panasonic 50in 'P' series plasmas we've seen – this one and the TX-P50G10 – are so similar, and that this one has the lower spec, this review may seem like a foregone conclusion.

And yet, despite the absence of 'key' features, it's perhaps surprising just how little the 'S10 gives away to its better-specified brother. In fact, it's extremely difficult to choose between the two.

Absence of Freesat tuner apart, the most obvious difference between the two is in the motion processing; the 'G10 has a 600Hz system, the 'S10 has to 'make do' with 400Hz.

Solid, smooth, natural motion
In practice this makes much less difference than you might expect. Neither has quite the slickness of Sony's 100Hz Motionflow, but both are satisfactorily solid and smooth, and there's no unnaturalness to motion, regardless of whether you're feeding them Blu-ray or standard-definition content.

In other respects the sets perform the same, too. So when you play the American Gangster Blu-ray through the 'S10 it rewards you with inky blacks, bright whites, and warm, though natural, colours.

It also means that images lack the razor-sharpness and scintillating detail of some sets we've tested, even though these aspects are pleasing when the set is viewed in isolation.

Switching to standard-definition doesn't settle the sibling rivalry, either. An upscaled DVD has the same, pleasing contrast levels and colour balance, and Freeview pictures are clean and stable, whether you're tuned to BBC 2 or Dave.

Reasonable sound quality
Even the sound delivery is the same, with the 'S10 matching the G's flatscreen audio adequacy.

The only other ways to separate the sets are minor: there are barely worth mentioning styling differences, and the 'G10 stand swivels where the one attached to the 'S10 does not.

We suspect that few prospective purchasers are going to be swayed one way or the other by that sort of thing, so make your decision the easy way.

If you want Freesat get the 'G10. If Freesat doesn't bother you, buy whichever model you can find for less.