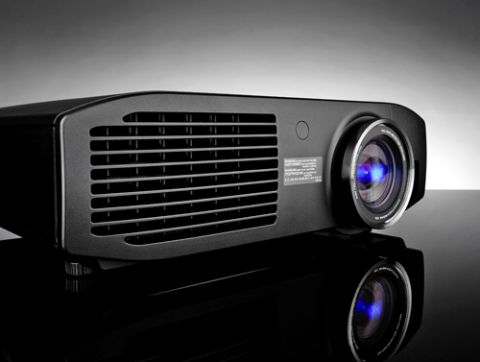 Best projector £2000+, Awards 2013. This two-time champion is still brilliant, but the younger competition is strong

Already widely available for a few hundred pounds less than when we first gave it an Award in 2012 (and again in 2013), this Panasonic is going to take some beating.

It’s such a great all-rounder that it has taken up permanent residence in one of our testing rooms. But this arena is evolving as fast as any other, so how does it fare against younger, fresher opponents?

It does very well indeed, even for a more mature model. We really like its colours, which are punchy and vibrant.

We put on a Blu-ray of F1 drama Rush and the paintjob on the cars is striking. Highlights and bright areas are more eye-catching than even Epson’s latest candidate, the EH-TW9200W.

It’s never unnaturally punchy, however – skin tones are convincing and there’s a good sense of realism. That said, the Sony edges ahead in this area, offering slightly more nuance to gradual shading. The Panasonic offers an astonishingly high level of sharpness.

Edges are resolute, which really helps objects to stand out. As we watch James Bond wag his chin in Skyfall, it’s easy to make out the individual grey whiskers on Daniel Craig’s face. You get deep, faithful blacks, with just enough light to reveal the darkest details.

Even as Bond sneaks about in a dimly lit Shanghai skyscraper, it’s easy to make out the leathery texture of his gloves. Motion is also handled with confidence. Slow panning and tracking shots are the trickiest to pull off smoothly, but there’s barely a trace of stutter or blur.

This is also strong. It’s a comfortable watch (an important thing for active 3D glasses), with a decent sense of depth.

The most complex scenes will result in the occasional bit of image instability, but mostly this is a capable showing. It’s not the best in this company, however – both the Epson and the Sony edge ahead when it comes to displaying a more dramatic impression of depth.

As for design, the Panasonic is largely business-like. It’s clear that function has been prioritised over form.

Around the back you’ll find three HDMI inputs plus PC, component, composite and S-Video slots. Set-up is easy thanks to a straightforward remote, a simple interface and motorised lens. You’ll be enjoying the picture in no time.

It’s not hard to see why this Panasonic has won two Awards and a permanent spot in our testing rooms.

Despite newer models, it holds its own in 2D and 3D, and walks away with its five stars intact.