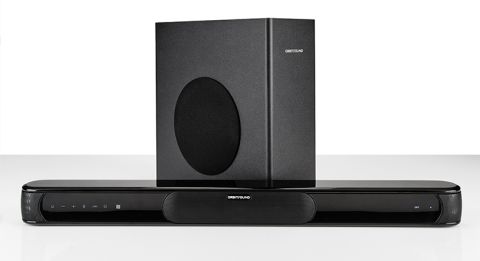 Exciting to listen to with films and easy to live with, but rivals offer greater refinement and a better 'surround' experience

Orbitsound’s flagship A70 soundbar is aiming to impress, with the £500 price tag pointing towards a serious approach to boosting your TV’s sound.

It uses Orbitsound’s proprietary airSOUND technology, which aims to eliminate sweet spots by dispersing sound into a room using side-firing speakers. It also features aptX Bluetooth streaming, and comes with a wireless subwoofer.

With Jurassic World playing on Blu-ray, you get a fairly expansive sound from the A70. It may not be big enough to fill a room, but it’s a clear step up from your TV.

The crisp sound is more prominent, with voices placed firmly in the centre and sharply etched – in a good way. You can hear every line of dialogue clearly, even with the roaring and stomping going on.

It’s a solid, meaty sound. The A70’s treble does stick out a little (shattered glass has a spiky edge), and it does have the tendency to harden up when watching a thin-sounding daytime telly programme. With films though, it just stays under control.

The bass isn’t overpowering, giving a great deal of punch and weight to the overall solid sound.

There’s a good sense of drama, with special effects banging and crashing about merrily. The A70 doesn’t have the spacious soundfield of the Yamaha YSP-1600, but its dynamics are punchier and more satisfying.

While you can play music from your smartphone using Bluetooth, we wouldn’t recommend it. There’s a lack of integration between the bar and the sub that gets emphasised, with the low end booming away inelegantly and midrange sounding thin and indistinct.

The A70 is slim and has a low profile, so it won’t obstruct the screen when placed in front of your TV. It’s a nicer, glossier finish than Orbitsound’s older bars, but it doesn’t feel quite as premium as rivals such as Yamaha YSP-1600 and Philips Fidelio B5.

However, both bar and sub are sturdily built. The S3 subwoofer has a matte black finish, and sits discreetly in the corner of the room despite accommodating a large 16cm bass driver. The subwoofer links to the bar via Bluetooth – there are no extra wires.

There are three drive units positioned at the centre of the A70: two 5cm drivers and one 2.5cm tweeter. Additional side-firing units are housed at either end of the bar.

Touch-sensitive controls on the left side of the unit light up when tapped, showing controls for power, volume, inputs, Bluetooth and NFC. All these controls are easy to adjust using the slim remote control, which is thankfully more substantial than credit card-style variants.

The buttons are responsive, and you can also tweak the bass and treble levels of the A70. Small dots on the right side of the bar show just how far up or down the tonal controls go. The display also shows which input you’re using (in very small letters).

Connectivity is straightforward, with an optical and 3.5mm the only physical inputs. There are no HDMI inputs, but the optical connections work perfectly well plugged straight to your TV. But for greater flexibility, it’s worth noting that price rivals such as Yamaha YSP-1600 and Sony HT-RT5 offer HDMI connections.

The A70 is a decent step above Orbitsound’s previous efforts. There are rivals such as Yamaha that offer a bigger and better surround sound, but the A70’s punchy dynamics, solid presentation and crisp way with voices is exciting.

Its performance with music is a let down, but that meaty sound is worth a listen as long as you stick with films. Give it a whirl.

See all our Orbitsound news and reviews

See all our soundbar news and reviews