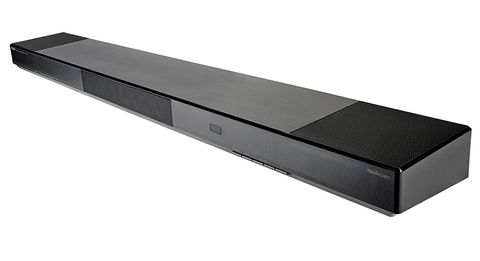 If you’re after a 5.1 alternative, this feature-laden soundbar will give you an enjoyable surround sound experience

Yamaha’s YSP range of soundbars has impressed us with its ability to deliver an enjoyable surround sound from a single soundbar. The YSP-1600 is no different: a £500 soundbar that aims to deliver a 5.1 surround experience, while offering the latest streaming features.

It’s an admirable feat, and one that Yamaha gets almost perfectly right.

The Yamaha YSP-1600 delivers a wide spread of sound, with the beam array speakers working their magic as the iconic theme from Jurassic Park kicks in. It’s an arresting listen.

While effects won’t whizz right the way around you as precisely as a proper 5.1 speaker package, it comes close enough to that effect.

Clear detail and attacking notes keep your attention, while a smooth flow through the frequencies ensures that the sound doesn’t harden up when turning the volume up high. Detail definition is layered and refined.

Considering there’s no external subwoofer, there’s a satisfying amount of weight underpinning the YSP-1600’s sound. The sound is admittedly top heavy, but it avoids sounding thin or hard thanks to an authoritative low-end. And you don’t have to worry about any booming or ponderous low-end effects.

This goes for streamed music, too, although we’d stay away from the Music sound mode, which makes songs sound strangely hollow and less cohesive.

All the YSP-1600 is missing is a bit of insight and expression. Dynamically, it doesn’t soar or dip as effortlessly as the more affordable Q Acoustics Media 4, nor is it as punchy as its price rival Orbitsound A70.

Voices, while clear and direct, could be fleshed out more to reveal character and emotion. Detail could be just a bit subtler, too – it would make the soundbar that bit more impressive.

Soundbars aren’t the prettiest looking products in the market, but they don’t need to be. Performance aside, they just have to be well made and discreet, and the Yamaha YSP-1600 ticks both those boxes. Build quality is robust and reassuringly hefty, with the brushed aluminium finish looking smart.

Factor in responsive controls, a low height and ease of use, and you have a soundbar that looks and behaves worthy of its £500 price tag. It’s quite a long bar, so will look best with TV screens of 48in and bigger.

Hidden under the front grilles is the beating heart of the YSP-1600: an array of eight speakers (each 2.8cm) that use Yamaha’s DSP to deliver – or ‘beam’ – that spacious 5.1 surround sound. These beam speakers can be adjusted to suit its position in relation to you.

On the remote control, simply press down on the desired position (left, centre or right) for three seconds, and the YSP-1600 will optimise the sound accordingly. It makes a subtle, but crucial, difference.

There’s no external subwoofer, as there are two upward-facing 8.5cm subwoofers built into either end of the soundbar, with bass reflex ports just under them.

The YSP-1600 has a decent spread of connections, with 4K-supporting HDMI, optical and 3.5mm inputs. An HDMI ARC output is also available on the back panel, as is a subwoofer output in case you want some extra heft to the YSP-1600’s sound.

Hooking up your TV and Blu-ray using HDMI will let you see on-screen menus, such as the sound settings, channel levels and dynamic range adjustments for the beam speakers. You can also set standby times and dim the display.

There’s an ethernet port on the back panel, and once connected to your home network, you can stream songs stored on your computer or NAS device.

This Yamaha supports for 24-bit/192kHz resolution files across all popular formats (Apple Lossless is restricted to 96kHz), and you can also play music from a smart device using Bluetooth or AirPlay.

You can also make the YSP-1600 the main controller of your home’s music thanks to the new MusicCast multi-room feature.

If you have other MusicCast-equipped Yamaha products, you can send the same piece of music across to all of them, in different combinations, via wi-fi. It’s a neat feature, and in addition every MusicCast product is capable of sending and receiving Bluetooth.

That means you can include non-MusicCast products in a multi-room set-up too: use that third-party speaker in your garden, or hook up a pair of wireless headphones.

But you don’t need MusicCast to make the YSP-1600 feel special. As a single soundbar, it performs admirably, and the extensive streaming features will appeal to many.

Yes, it could be punchier and have more insight to its sound – the Award-winning Q Acoustics Media 4 offers a subtler and more enveloping performance at £330, for instance.

But Yamaha does know how to do surround, so if you want a taste of the 5.1 experience without going the whole hog, the YSP-1600 soundbar deserves your attention.

See all our Yamaha news and reviews