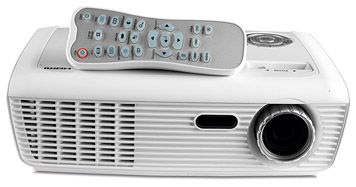 Impressive 2D performance for such a cheap projector. The 3D-XL add-on certainly works but the quality is so-so; a budget solution

One of the biggest obstacles to 3D is cost. The discs, the player, the display, the glasses: it all adds up – and the only 3D projectors we’ve seen have been the wrong side of £3000. Until now.

Optoma’s 3D-XL add-on (below) turns any one of Optoma’s 14 compatible projectors, and any other DLP-Link machine – such as this, the HD67N – in to a 3D projector.

Lack of depth to 3D

There are two HDMI inputs, one HDMI output, and it supports 1080p/24fps video.

The small HD Ready HD67N projector can deal with 1080p/24fps, and sports an HDMI input, PC connection and even little speakers.

A zoom control gives flexibility, but it needs to be fairly close to the screen.

2D looks good for the money. Fast motion sees Optoma lose a little control but it’s colourful, fairly sharp and bright (it does get hot and noisy, though).

Switch to 3D and while it works, there isn’t much depth and images lose sharpness and punch.

This is a good budget projector, capable of producing enjoyable images.

The 3D-XL is a more qualified success: it works, and is affordable, but the effect is underwhelming. Our verdict for the 3D-XL add-on is three stars.