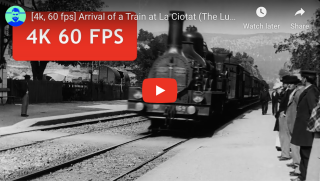 Need an uplifting mid-morning moment? Have a gander at this bit of progress. The Lumière Brothers' 1895 short, Arrival of a Train at La Ciotat is doubtless one of the most famous historical film clips. You've almost certainly seen the 50-second movie at some point in your life – but not like this. If you want to cut straight to the chase, you'll find both the original and the levelled-up version, arranged by YouTuber Denis Shiryaev, below.

The silent film shows a steam locomotive arriving at the French coastal town of La Ciotat, alongside passengers waiting to board. Like most early Lumière Brothers films, L'arrivée d'un train en gare de La Ciotat consists of a single, unedited view illustrating an aspect of everyday life. There is no camera movement; the entire film consists of one continuous shot in real-time.

The movie was filmed on the cinematograph (which the brothers invented), an all-in-one camera, printer and film projector. As with all early Lumière movies, it was made in 35mm format with an aspect ratio of 1.33:1.

Apparently, when the film was first shown in 1896, observers were so overwhelmed by the depiction of a life-sized train approaching them at speed that they ran to the back of the theatre.

Anyway, here's the original clip again, to jog your memory.

As seen on Reddit and noted by Digg, YouTuber Denis Shiryaev wanted to update the look of the clip, so with the help of several neural networks, he upscaled the footage to 4K resolution and 60fps. The result can be seen below – there's even some added sound as the train pulls in. If you wait 'til the end, you'll get a direct comparison between the 4K version and the original. It's quite something – perfect for your elevenses coffee break.

The 7 best 4K TV deals of the week

Sony reveals pricing for most of its 2020 4K LCD TVs