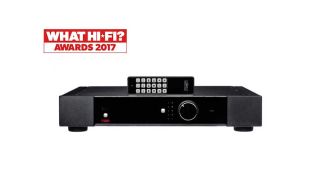 A stereo amplifier is the heart and soul of any hi-fi system. Whether it's all-analogue or combines digital connections to serve all sources, the right stereo amp will make you want to listen to your entire music collection again and again.

And if you pick any of these five fantastic 2017 What Hi-Fi? Award-winners, you'll be in very good hands indeed.

It’s been three years since the Onkyo A-9010 (above) made its debut, but we’ve yet to hear another budget stereo amplifier that sounds so accomplished and fun. £200 seems like an astonishingly generous price for the A-9010’s lively, open presentation and strong dynamics.

If you’re on a tight budget, this triple-Award-winning Onkyo is more than capable of making your system sing.

Have a bigger budget? Go up the price scale and these two Regas are simply superb.

The Rega Brio (£600, above) might be a new winner for 2017, but it feels like a returning hero. It takes the former Award-winning Rega Brio-R and improves it in every way. It retains all of Rega’s sonic hallmarks - that addictive sense of energy, its punchy dynamics, surefooted rhythm - and adds muscle and subtlety to the mix.

Beating last year’s Award-winning Cambridge CXA60 in a tightly-fought battle, this thrilling and affordable Brio is a terrific amp for any system.

The stalwart Elex-R (top) - with no rival preventing its fourth appearance at the What Hi-Fi? Awards - takes that lively performance another notch higher. For £300 more, it delivers a sound that’s bigger, more nuanced and a touch more mature than its punchy younger sibling.

Rega, though, is denied a hat-trick of Awards, as a new Moon eclipses last year’s winner, the Rega Elicit-R.

The Moon 240i (£1990, above) is in a class of its own: its smart looks, high-quality build and stunningly sophisticated performance make it seem like a product twice its asking price.

We’re impressed not just by its fluid, smooth dynamics, but also by the understated way in which it unearths finer subtleties and ties a song together cohesively.

To top it all off, we’ve got one of the priciest stereo amplifiers to win an Award for a very long time: the Roksan Blak (above).

This beast of an amplifier does the near-impossible: combines huge reserves of power and scale with composure and insight in a way that sounds effortless.

Just shy of £3000, this premium amp does a bit of everything: analogue and phono inputs are joined by hi-res USB and Bluetooth connections, opening it up to use with a variety of sources.