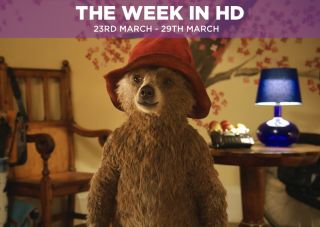 Voiced by Ben Whishaw, Paddington journeys to the UK and finds himself in the care of the Brown family. Despite his bumbling, marmalade-loving ways he becomes the unlikeliest of heroes when he saves the day from Milicent (Nicole Kidman) who decides this Peruvian bear deserves a place on her mantelpiece.

There's some surprisingly goofy and clever humour here that makes this adaptation a warm and rousing success.

Buy Paddington on Blu-ray at Amazon

The first series of the HBO comedy set in Silicon Valley sees a release before the start of the second series in April. Read our review for a more in-depth look.

Buy Silicon Valley Series One on Blu-ray at Amazon

It's set in Brooklyn. Hardy's bartender Bob Saginowski discovers that local gangsters are using his bar to conduct 'money drops'. When a robbery goes wrong, Bob and his older brother Marv (Gandolfini) find themselves at the centre of the fallout with little room to manoeuvre before the police close in.

It's a tense, suspenseful film with commanding turns from all involved. And the dog in it is adorable.

Buy The Drop on Blu-ray at Amazon

Welcome Back, Jim Gordon. And what better way to welcome Jim back into the force than by making him root out corruption in the Gotham City Police Department?

And with his moral compass going haywire, will he take Oswald Cobblepot's offer of help, even as the rising crime lord takes greater control over Gotham's underworld?

Try. The survivors have found shelter but staying there may be trickier when it emerges that life within the walls is beginning to mimic the world outside.

When the outside is full of zombies that's probably not the best of living conditions.

The Female of the Species. After Joan's loss last week, is she ready to move back into the Brownstone and become detective buddies with Sherlock again? Not just yet, it seems, as she has some unfinished business to attend to.

Meanwhile, Sherlock drags a reluctant Detective Bell back into the game to investigate the case of the two missing zebras. It's a hoot.

Home Birth. We reach the end of the fourth series as Hannah and the gang try to dissuade Caroline from having home birth.

It's the third week of the heats and it's getting harder to keep track of all our favourite contestants. We've had some delicious, inventive, daring and dowright odd dishes so far (vegan chocolate using avocado? Nope, not in our kitchens), and we can't wait for more.

Five new contestants must cook their hearts out (twice, if the first round isn't up to scratch), before serving up two dishes each to past MasterChef finalists.

More than 20 years ago, Hillary Clinton made a speech where she challenged authorities to treat women's rights in the same way as human rights. This documentary examines whether anything has changed since that stirring speech back in 1995.

Tom Cruise's Edge of Tomorrow didn't make much of a splash at cinemas last year but it really ought to have.

Cruise finds himself enlisted in the army against his will to fight a war against the alien Mimics, and when he's infected by one of them he experiences the same day over and over again.

It's smart and action-packed - and Emily Blunt is terrific in it, too.

Buy Edge of Tomorrow in Blu-ray at Amazon

The Offer. There's a new villain in Starling City when Michael Amar turns up, while Laurel (the new Canary) contemplates an offer from Nyssa. Will she join the League of Assassin's, we wonder?

Inside No. 9 is unlike anything else on TV. Each half-hour episode is a self-contained plot with its own cast, tone and genre, with all stories taking place behind doors marked number '9'. Delightfully gruesome stuff.

Buy Inside No. 9 series 1 on DVD at Amazon

England return to competitive international action with this game against Lithuania. They'll want to guard against complacency here by gobbling up another three points

Charles Campion sets the critic's brief tonight, and he wants a savoury dish that is either classically British or genuinely Indian. Will our four quarter-finalists stick to the brief and prove they can present a sumptuous dish without overcomplicating it?

For dessert, "one should be overwhelmed by a good pud!" We have to agree with that one.

Aftershocks. After a three month hiatus, Agents is back on screens and everybody is dealing with the aftermath of Tripp's death. Hydra seizes the moment to make a move against S.H.I.E.L.D but Coulson and his team have a plan…

Film4's Studio Ghibli Season starts off with perhaps its most famous film, Spirited Away.

It follows Chihiro, a young girl trapped in a fantasy land. She must prove her worth to the witch Yubaba to free her parents from a curse that's turned them into pigs. Absolutely beautiful to look, it's also full of scary moments with No Face in particular providing plenty of them.

To think about the plot in detail would as Willis says in the film "fry your brain", but in a nutshell Levitt plays a looper, an assassin who kills targets sent back from the future. When his target is his older self this creates all sorts of problems, which we won't spoil here.

Looper is a film full of surprises, especially in the second-half which changes tack and isn't worse for it.

We have no idea who's playing as the semi-final matches have not been played, but we definitely know England won't be there to get battered by a better team. So that's good.

2015 Formula 1 Championship: The Malaysian Grand Prix BBC One HD, 7am

The race is on for the 2015 title, but will it be between Nico Rosberg and Lewis Hamilton or will this weekend bring in new contenders?

Mercedes look dominant but there's plenty of action behind them with Fernando Alonso expected to return for McLaren, and Ferarri, Williams and Red Bull battling it out for third place… unless something unexpected happens to both Mercedes cars (no, we don't believe that will happen either).

Marc Marquez is once again the defending champion, with the pack full of rivals old (Honda teammate Dani Pedrosa, Valentino Rossi and Jorge Lorenzo at Yamaha) and new - 2013 Moto3 champion Maverick Viñales (who has the coolest name ever) enters the game, as does Moto3 championship runner-up Jack Miller, who has skipped Moto2 to join Brit Cal Crutchlow on Team LCR's open-spec Hondas.

Impressive, exciting and full of blood-pumping action - MotoGP is well worth a watch.