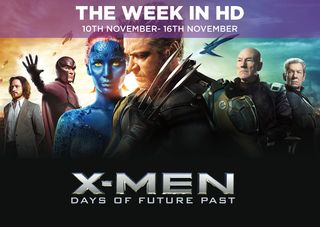 Holy Christmas wish list, Batman! This is the greatest gift ever.

Not only does this limited edition Blu-ray box-set contain all the episodes of the delightfully parodic 1960s TV series featuring Adam West, Burt Ward and Alan Napier, but it also has a crazy amount of extra features and goodies that fills us with joy.

They include: Hot Wheels Replica Batmobile, The Adam West Scrapbook, 44 Vintage Trading Cards, episode guide booklet, and three hours of extra features that includes hanging out with Adam West as he goes through scripts, picks his favourite episode, and gives us an insight into the daily life of being Batman.

X Men: Days of Future Past

The last 14 years have seen an original trilogy, two Wolverine spin-offs, and a prequel/reboot/reimagining with an entirely different cast. It’s been a bit messy, alright – but Bryan Singer’s return to the franchise wipes that slate clean.

Days of Future Past bashes together mutants old and new in a neat time-travelling story, alternating between an apocalyptic future and the funky 70s. It’s kept on the right side of silly by a strong cast with great newcomers (Evan Peters’ Quicksilver steals every scene he’s in). The series hasn’t been this fun or competent since 2003’s X2.

Viper. Gordon must race against time to stop a deadly new drug (which makes the infected violently super-strong before killing them) from taking over the streets of Gotham.

In the mob business, Oswald continues to worm his way into Maroni's good books, while Fish Mooney employs a new weapon against her boss Falcone.

Self-Help. The group decides to split up. While normally this would be a bad idea (all the horror movies in the world show us why), it throws up some interesting dynamics and relationships within the separate teams.

Things You Can't Outrun. Barry has to face off this week's dangerous meta-human, The Mist, who can transform himself into toxic poisonous gas.

And that's while he's investigating how Caitlin's fiancé died during the particle accelerator explosion, while Joe decides to pay Henry Allen a visit in jail for the first time in years.

Week two of the best cookery competition on telly, and new chef-host Marcus Wareing is still being disarmingly sweet and supportive. We're going to assume he brings out the claws and dragon breath as the competition ramps up in the later stages.

But tonight, there are five brand new chefs hoping to impress with their kitchen skills as they attempt to cook a woodcock and a custard tart.

Last time we saw Sherlock, he and Joan had parted ways on not-so-good terms. She moved out of the brownstone, while he moved to London to work for MI6.

Of course MI6 fired him, and now he's back in New York, hoping to rebuild his relationship with his Watson. Except he's brought a young, new apprentice with him, and Watson isn't very pleased.

Ugh, clowns. Twisty the Clown makes another unsettling appearance, while two-faced (literally) Edward Mordrake continues to haunt the Freak Show for a suitable act to add to his ghostly troupe.

Sleepy Hollow is visited by The Weeping Lady, and it seems this spooky spectre is on a mission as it haunts and kills the women in Ichabod's life.

Do they know each other from before, perhaps in a past life?

We love a good board game. Board games are one of the best, most beloved things ever created by us humans.

So we're really hiding our faces behind sofa cushions in horror as the candidates are tasked with creating a brand new board game.

Aaron Sorkin's drama comes to an end in this third and final series, but Sorkin isn't going down without a fight.

We kick off in blistering form as the ACN team report on the 2013 Boston Marathon bombing, struggling to sift through real evidence and Twitter-based information. There's a hint of Snowden in here, too, as Dev Patel's Neal comes in possession of high-level government documents.

Fast-talking dialogue, unflinching look at the real-world events, and even a bit of light-hearted humour - there's plenty to appeal to Newsroom fans in its last outing.

Corto Maltese. Gotham, The Flash, Arrow - DC may just have the edge over Marvel when it comes to TV (and we're still hoping a UK channel picks up Constantine very soon).

Tonight, Oliver is pleading with his sister Thea to come home, while Diggle is on a mission to track down the A.R.G.U.S. agent who went darkside.

Power. They've survived infancy and adolescence, and they've made a home. Now the animals must assert their power to get the best access to food and water, and flaunt their success and finer points in hopes of attracting a mate.

It's the annual star-studded television fund-raising marathon event, with celebrities from TV, film, theatre, reality shows and all other media taking part to raise money. There will be special performances, special sketches from your favourite show, and a host of guest stars.

Face My Enemy. Coulson and May go undercover on a mission together, and thus begins one of the most entertaining episodes of S.H.I.E.L.D. yet. But as they track down a painting with alien writing on it, will Coulson be betrayed by the one person he trusts the most?

Gadgets, espionage, laser-fields, a kick-ass fight scene that would make Buffy proud and plenty of genuinely laugh-out-loud moments - we hope the show keeps on giving us more episodes like this.

We can think of no better way to end the week than in concert with David Bowie. Filmed in Vancouver, 1983 during the spectacular Serious Moonlight Tour, Bowie plays all your favourite hits: from Life on Mars? to Fame to Heroes to Let's Dance - and so many more.

We'd crank up our home cinema system for this one.

England pick their campaign up against Slovenia after a good run of results (less so the performances). The team has a chance to cement their position on Group E before International football resumes next year.

A New Dawn. Atlantis returns to fill the Doctor Who time-slot, although we're still baffled why this family-friendly Saturday adventure has an evening slot.

Let's hope the action and drama is made of meatier stuff in the second series. It's been a year since the events of the debut series, with newly-crowned queen Ariadne now finding herself at war with long-term nemesis and step-mother, Pasiphae. And when will Jason find out exactly how he's related to the royal family?

Smart is the new sexy, as Sherlock battle wits and emotions with the alluring Irene Adler in this stunningly written and filmed episode that will keep you guessing until the very last second.

Steven Spielberg tugs at the heartstrings and employs the waterworks in this moving World War One drama. Young Albert (Jeremy Irvine) enlists in the army after his beloved farm horse Joey is sold to the cavalry, and they both travel different paths to France, where they meet with the hardships of war and hope for reconciliation.

Motorbike racer, speed junkie and spectacular-sideburns-owner Guy Martin joins the two-year restoration of a Spitfire that was buried beneath a French beach for decades.

As the Spitfire is restored, Martin recounts the adventures of its pilot, Squadron Leader Geoffrey Stephenson, in his unique, engaging way.