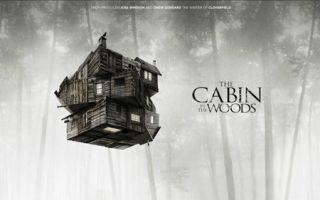 Welcome back to The Week in HD, a guide to all the best high definition TV shows, films and sports that you should most definitely watch this week.

Apologies for being a day late – you haven't missed anything, promise! This week's a bit of a Doctor Who week for me, with the departure of the Ponds meaning I'll probably be mourning with a large helping of fish fingers and custard (I've been told it's delicious – I'll get back to you next week on that).

Here's what else is on this week:

The Cabin in the Woods - Blu-ray

Between writers Joss Whedon and Drew Goddard, they have an impressive CV of writing for cult TV and film: Buffy the Vampire Slayer, Angel, Alias, Lost, Firefly, Cloverfield, The Avengers...

So when they decide to take on the tropes and conventions of a typical teen horror film and put their own spin on it, you know it's going to be something special. It's scary, clever, funny, gory, and has possibly my favourite plot twist ever.

If you're a Bond fan, this one's for you. For the first time ever, here's a box set of all 22 Bond films in Blu-ray. From Dr No to Quantum of Solace, each film has its own disc and hours of special features. We think a rewatch before Skyfall is on the cards.

The baking contestants were spared an elimination last week, so it's a double elimination tonight amidst three sweet dough challenges: a signature bun, a jam donut technical challenge, and a showstopping loaf of bread.

The Big Bang. Amy Pond's time with the Doctor will finally come to an end on Saturday, but to cheer ourselves up, here's the time Amy and little Amelia teamed up to kick-start Big Band Two to save reality, bring back the Doctor from being erased from history, and married the boy of their dreams. Glorious Ponds.

Whether you've already seen it or have been watching the repeat on Sky Atlantic, here's the final episode of the critically acclaimed mob drama, where conflicts are resolved and the family reunites for a fateful dinner.

In this Culture Show special, J K Rowling talks about her first novel for adults, The Casual Vacancy. Due out on 27th September, the story revolves around a small English town that's thrown into chaos after their local parish councillor dies.

Goodwood Revival is fabulous, and if you've never been, the highlights from this year are bound to make you book your tickets for next time. It's the world's only vintage motor racing event, held yearly at Chichester, West Sussex, with plenty of classic cars and Formula 1 drivers whizzing around.

It's not just vintage cars on show - vintage fashion takes centre stage with everyone dressed up to the nines in full period costume from the '40s, '50s and '60s. I went last year, and it's like stepping into the Tardis and travelling back in time to the glamourour post-war era.

Two and a half hours of Slash? Yes, please. The guitar legend travels back to former hometown Stoke-on-Trent to perform his hits with his various bands.

Hazel Irvine presents highlights from the first day of the 39th Ryder Cup.

The Angels Take Manhattan. The time has arrived: the Ponds are leaving. I love the Ponds. I don't want them to go. But we always knew that Amy and Rory would leave the Doctor this season, and we've got New York City, River Song and the terrifying Weeping Angels to send them off in heartbreaking style.

Head writer Steven Moffat said: 'If the Ponds' departure doesn't make you openly weep, I haven't done my job.' Thanks, Moff, there'll be tears before bedtime.

We're back with the Opposition this week, and with Nicola stuck on a long train ride to Bradford under the watchful eye of a 24-hour news crew, Malcolm takes this chance to put his plans of overthrowing his hapless leader into motion. Trouble is, he's only got Ben Swain to help him, which is never a good thing.

It's Edith's turn to get married, but will the family's reservations about Strallan's age finally get to her? Elsewhere, Anna is still trying to free Bates, while Mary takes the estate's future into her own hands.

A weekend shooting party at Hector's in-laws gives Freddie the opportunity to question Adam Le Ray (played brilliantly by Moriarty himself, Andrew Scott) about his relationship with Ruth, which Bel and Hector continue their tryst.