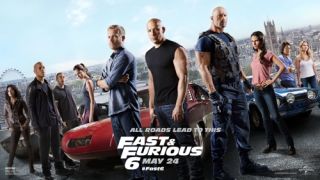 Six films in and it shows no sign of stopping. Bringing back the original cast of Vin Diesel, Michelle Rodriguez and Paul Walker was the first masterstroke. Mashing up genres with a bank heist and fast car chases? Even better. Oh and it's set in London. If the seventh film (currently being filmed) is just as good, we'll be happy.

Biscuits and Traybakes. There is going to be a giant dalek made out of biscuit. Nothing else matters.

Professor Brian Cox focuses on the darker side of science to ask if scientists sometimes go too far in their pursuit of cutting edge discovery. We chart the history of British science, from the Frankenstein-inspiring origins of electrocuting a hanged man in 1803, to the modern nuclear bomb and genetic modification - is it all worth pursuing?

A fabulous film adaptation of Alan Bennett's play about a group of gifted and charming A-levels boys getting prepped for their Oxbridge entrance exams in 1980s Yorkshire. As much a film about the eight boys as it is about their teachers, it's a beautifully, and hilariously, written script that celebrates growing pains and clashing, creative teaching methods alike. Alongside the late great Richard Grifftiths, Frances de la Tour and Steven Campbell Moore, the play kick started the careers of James Corden, Russell Tovey, Jamie Parker, Dominic Cooper and Samuel Barnett.

Thomas Shelby fixes a horse race, stirring the ire of the local kingpin, and also starts a war with a gypsy family. Meanwhile, Inspector Campbell carries out a vicious raid in search of the stolen guns. Fantastic new drama (with a fabulous soundtrack) about a violent but stylish criminal organisation set in Birmingham, 1919, with a stellar cast of Cillian Murphy, Helen McCrory and Sam Neill.

Brad Pitt and George Clooney team up for another caper in this Coen brothers comedy. A disc containing the memoirs of a fired CIA agent fall into the hands of two gym workers, who decide to flog it to the highest bidder. Also stars Francis McDormand, Tilda Swinton and John Malkovich.

K-Folk. Katherine Ryan, Josh Widdecombe, Phil Jupitus and Alan Davies join Stephen Fry in discovering the wonderful world of...K-Folk. We don't know either, so we'll be tuning in to find out.

The ultimate Saturday night guilty pleasure. Love or hate them, they'll be a sight to see together. Miranda Hart interviews Sir Bruce Forsyth about his 70-year career in showbusiness. The hour-long celebration of the highs and lows of his career ends with a memorable (for better or worse) performance with Hart and Forsythe.

The first Iron Man film is just one long exposition piece about a man building a suit to fight an injustice. And it's fantastic. Robert Downey Jr made the comeback of a lifetime and is now inseparable from the genius, billionaire playboy philanthropist, Tony Stark. Oh, and he's Iron Man, too.

Race day. With the European leg over, the F1 calendar heads east to the glorious night racing of the Singapore Grand Prix. It's a stunning track set amidst the backdrop of a twinkling city where Red Bull's Vettel has been dominant for the last two years - can he do it again?

The best heist film of all time, and one of my favourite movies. A dazzling ensemble cast and a story that's as full of surprises and twists as it is with humour and quick wit. Starring George Clooney, Brad Pitt, Julia Roberts, Andy Garcia, Don Cheadle and Elliott Gould.

Ron Howard's Rush is in cinemas right now (go watch it!), and the dramatisation just about comes close to the real events that took place. With unseen footage alonsgide interviews with team managers, journalists, friends and families - this documentary takes an unflinching look at the glamour, danger and rivalry of the 1970s, which shaped the sport of Formula 1.

Series four of this much-loved period drama is finally back on our screens, and the premiere starts off grimly with the aftermath of Matthew's shock death.

How will Mary cope with the grief, and with her new baby? And it seems Thomas is back to his old tricks, while Carson has an unwelcome reminder of his past... We're sure Maggie Smith's fabulously acerbic Lady Grantham will whip everyone back into place.