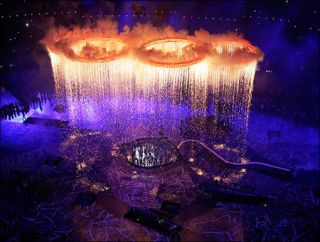 Welcome back to The Week in HD – our weekly guide to all things high-definition on TV. Apologies for the silence last week – we were all swept away by Olympics fever, especially by Danny Boyle's incredible opening ceremony, not to mention the fact that it's been quite an amazing week for Team GB.

We won't be able to list all the events happening on BBC HD and Sky – that would be insane – but there's plenty of Olympics sports happening every single day, all in glorious HD!

In case you want a breather from all the Olympics, here are a few other things showing on TV:

Special Edition. In the penultimate episode of this series, Alan tackled north Norfolk's hot topics, but Sidekick Simon is hell bent on pushing him over the edge.

As the final days of RTD's Miracle Day approaches, we get closer to the secret behind the Three Families' aim in plunging the world into a zombie recession - Jack's days are numbered as well...or are they?

Vampires in Venice. The Doctor takes Amy and Rory to 16th century Venice for a date...and encounter some very well-dressed vampires. There's a wonderful score by Murray Gold, and Helen McCrory guest stars as the vampire queen, but is she really what she seems?

Amen. International breaking news versus domestic news - the News Night team struggle to cover both an uprising in Egypt and a teachers' protest in Wisconsin.

Ewan McGregor and Scarlett Johansson star in this sci-fi movie, as two friends living in a strict utopian facility, where winners of a lottery are allowed to visit 'The Island'.

But is this island a relaxing holiday or a place where they harvest organs? Michael Bay directs, with Sean Bean, Michael Clarke Duncan, Djimon Hounsou and Steve Buscemi also starring.

Hallowe'en Party. A children's Hallowe'en party ends in a murder most foul, when a young girl is found drowned in the apple-bobbing tub. Just a few hours ago, she was boasting about having seen a murder from years ago...

Wrapped Up In Death. A mummy, a curse, and a murder. Playing around with plenty of Indiana Jones and The Mummy references, the detectives investigate the murder of a museum curator who is believed to have fallen foul of a Mayan curse...a curse that seems to have latched on to Castle as well – hijinks ensue.

Third instalment from the lovable Pixar animated film series, which finds the toys mistakenly delivered to a daycare centre, right before Andy leaves for college. Prepare for tears at the end.

Originally meant to be a sequel to Leon, Luc Besson directs this assassin-vengeance story, where Zoe Saldana is hunting down the mobster that killed her parents when she was a child.

Ourselves Alone. The Atlantic City power struggle continues, as Nucky finds himself in jail, but hatches a plan to re-establish his authority and to smoke out who betrayed him, all in one fell swoop.

Based on F. Scott Fitzgerald's 1922 short story of the same name, this elegantly filmed story follows the unusual life of Benjamin Button, a man who ages in reverse, and his relationship with Daisy, his love interest throughout his life. Directed by David Fincher, starring Brad Pitt and Cate Blanchett.

And so, it sadly ends. The closing ceremony will celebrate the achievements of all the athletes, and includes the handover from London to Rio for the 2016 Olympics. We'll be rocking out to 'A Symphony of British Music', directed by Kim Gavin, celebrating 50 years of British music.