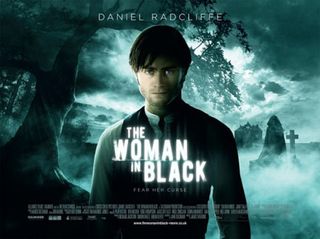 Hello everyone, and welcome to The Week in HD, your weekly guide to the best high-definition TV shows, films, sports and Blu-ray releases.

Here's our pick for this week:

The Woman in Black - Blu-ray

Based on Susan Hills's novel, The Woman in Black is a chilling Victorian ghost story about a young lawyer (Daniel Radcliffe) investigating the mysterious deaths of children in a remote village, with the spooky Eel Marsh House being the epicentre of ghostly activity.

Not to mention the extremely creepy and genuinely scary eponymous woman dressed in all black. Produced by Hammer Films, the atmostpheric film is the highest grossing British horror film in 20 years.

In series 6, Dexter juggles fathering duties with tracking down the Doomsday Killers – two antagonists who are attempting to bring about the Apocalypse through a spat of murders based on the Book of Revelations.

Elsewhere in Miami PD, Quinn proposes to Debra, La Guerta is promoted to Captain, and The Ice Truck Killer makes a cameo.

The second series set in 1960s Wales brings two new adversaries for Dr Prem Sharma: evangelist preacher Herbert Todd, and his dreaded mother-in-law, all amidst a smallpox crisis affecting the town. Continues throughout the week.

The Romulans are proposing peace talks with the Enterprise, but of course it's only a ruse to attack Earth. Also, there's evil clones! There's an evil clone of Data, and a Picard-based Romulan-leading evil clone, who I've only just realised is played by Tom Hardy.

Daniel Craig's second outing as 007 wasn't exactly the best follow up after the brilliant Casino Royale (lack of Eva Green for one thing), but there's plenty of explosions and action to keep you entertained, even with the darker tone of the film. Skyfall, out later this year, looks to be a lot more fun.

Shakespeare's Women. Actress Joely Richardson takes a look at two of Shakespeare's most celebrated comic heroines – Viola in Twelfth Night, and Rosalind in As You Like It – and investigates why they spend most of their play disguised as men, while also being strong and sassy. With contributions from Vanessa Redgrave, Helen Mirren, and Germaine Greer.

Featuring the voices of Jack Black, Angelina Jolie, Dustin Hoffman and Seth Rogen, the lovable martial arts panda faces a new foe in the guise of a really cool evil peacock, who brings some of the best animated sequences in the film.

Nicola Walker has barely been in office for a week, when DOCAS is beset by a new crisis when someone accidentally deletes the immigration records of 170,672 people. She tries to keep the disaster from leaking to the media, while the incoming Tucker looms.

Zoe Ball and Jo Whiley present live coverage from the first night of the festival, with performances from Tom Petty and the Heartbreakers.

Last in the series, with The Thick Of It creator Armando Ianucci joining David Mitchell, Lee Mack and co.

Robert Downey Jr takes on Mickey Rourke in a clash of metal suits in the Marvel sequel, which also sees the introduction of Scarlett Johansson as Natasha Romanov/Black Widow.

Jake Humphrey's off touring with the football, so presenting duties for the qualifying race from Valencia are handed over to the fabulous Lee McKenzie.

Forget everything else - Pearl Jam are headlining tonight.

Fearne Cotton and Greg James brings us five hours of live coverage of Radio 1's Big Weekend, with performances from the likes of Emile Sande, Ed Sheeran, Kasabian, and Jay-Z.

Live coverage from the city race in Valencia, with Lee McKenzie presenting. Could there be another surprise win for a record different 8th driver?

Aliens unwisely pick a south London housing estate as their invading base, and they are confronted with the local teen gang. Acclaimed sci-fi/horror/comedy film from debut film director Joe Cornish.