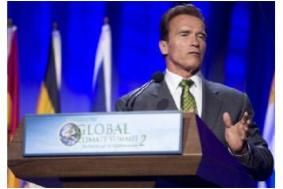 But the legislation has been condemned as unnecessary by the Consumer Electronics Association, which speaks for those involved in making and selling TVs in the USA.

However, before everyone gets carried away with the apparent drama of the California move, it's worth getting a few facts into perspective.

The proposed regulations will only affect TVs of 40in or more, won't take effect until the beginning of 2011, and still haven't set any requirements for screens over 58in.

Indeed the law, which will be the first of its kind in the US, is designed to be phased in over two years from January 2011, only having full effect in 2013.

Some TV manufacturers already have products on the market meeting the 2011 standards, and by 2013 it's likely many will have sets on sale exceeding the California requirements, judging from the low-power TVs on display at the recent CEATEC show in Japan.

In fact figures put forward by the CEA, suggesting that a quarter of sets currently on sale could have to be removed from shop shelves, also make it clear just how many TVs already comply with the future regulations.

Using technologies such as LED backlighting, improved liquid-crystal and optical designs, and systems designed to adjust to ambient light condition and even put the set in standby when it's not being watched, the TVs claim huge energy savings over current sets.

That's in no small part due to domestic Japanese requirements to reduce power consumption by 25% in the immediate future.

The California Energy Commission estimates that the state's population owns 35m TV sets and related devices, which account for about a tenth of household energy consumption.

It says TV owners could save around $30, or £18, per set per year if the energy-reduction plan is implemented, and that the state could save $8.1bn (almost £5bn) over the next decade if all sets meet the State requirement.

The expected reduction in consumption could also allow it to abandon plans to build an extra gas-fired power station, saving $600m.

The CEA says that the industry is already doing much to reduce power consumption without the need for legislation, and that too much government interference could hold back innovation and prove expensive for manufacturers and consumers.

It disputes the figures regarding potential savings, saying they're based on data failing to take account of recent energy-saving innovations in the TV field.

Speaking for the CEA, consultant Seth Greenstein says that "With voluntary compliance, manufacturers can meet the targets over time, managing the cost impact, yet not in any way impeding innovation."