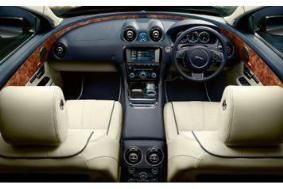 B&W has already developed an optional in-car system for the midrange XF model, and has worked closely with Jaguar on the new XJ series.

Each component has been specially designed for the new car, using B&W's aluminium dome tweeters and Kevlar drive units.

The 20-speaker, 15-channel system has been fine-tuned and calibrated by the same engineers who tuned B&W's 800 series speakers used at Abbey Road Studios in London.

And it's the first in-car system to use the Audyssey MultiEQ XT calibration system, which digitally corrects any sonic imperfections created by the cabin environment.

What's more, it can play DVDs, stream video from an iPod or USB memory stick, and play music from the built-in hard disc drive or via Bluetooth audio streaming. Oh, and there's a digital TV tuner as well.

The XJ also offers Dolby Pro-Logic IIx and DTS Neo:6 processing to make the most of its 7.1 surround sound.

From the outset of the car's design, B&W was given "unprecedented input" on the precise positioning of the speakers within the cabin, and their locations were carefully chosen to ensure that each seat gets the same sound quality.

The system uses seven aluminium dome tweeters for a "refined treble performance" and B&W's Flowport technology for the main speakers.

We'll have more technical details of the system, plus an interview with Matt Jones, Jaguar's technical specialist for audio, in the Ultimate Guide to High-End, on sale from July 30th.