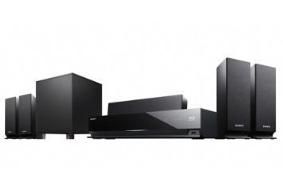 Sony UK has confirmed that its forthcoming BDP-S770 (£299) and BDP-S570 (£230) Blu-ray players will be fully 3D-capable straight out of the box. They're due on sale in September and May respectively.

The entry-level BDP-S370 (£180) will be 3D-ready, meaning it will require a software upgrade to have full 3D playback added. It goes on sale in March. All three models are SACD compatible as standard.

Ahead of its UK press launch, due to take place on Friday, Sony has upped the stakes in the 3D race with the announcement that all its Blu-ray in a box systems launched at CES will be 3D-ready, requiring only a software update to give them full 3D capability.

It had previously only announced the range-topping BDV-IZ1000W system as being 3D-capable, as well as having Bravia Internet Video capabilities. Now, however, it has confirmed that the BDV-E370, BDV-E870, BDV-E970W, BDV-F500 and BDV-F700 can all have 3D playback added with a software update.

In addition, the company has confirmed details of its first two 3D-capable Blu-ray players, the BDP-S470 and BDP-S570. The latter is able to play 3D straight from the box, while the more affordable BDP-S470 will do so after a software upgrade.

In addition, the two players have Bravia Internet Video access, including the BBC iPlayer from March, via the built-in Wi-Fi of the BDP-S570, or on the BDP-S470 using a plug-in USB Wi-fi adapter.

The players and systems can also be controlled from an iPhone or iPod Touch, using software downloadable from the App Store.

Stuart Kemp, Sony's European Business Manager, Audio and Video Marketing, says that “The latest additions to the Blu-ray Disc Player range for 2010 confirm that Sony is in a unique position when it comes to providing consumers with the full 3D experience, from capture to delivery.”

Full details of pricing and availability later in the week from our man at the Sony launch at Gleneagles, Scotland – provided we can keep him off the golf course long enough.