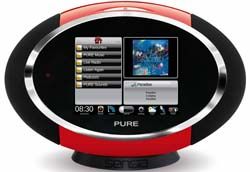 Pure is ramping up to the launch of its Pure Music service by giving away 10,000 downloads.

You can grab your free track by registering your interest in the new service - due to launch later this month – at Pure's website here.

We've been trialling a beta of the Pure Music service, and you can read our review in the forthcoming January issue of What HI-Fi? Sound and Vision (on sale 14 December), as part of a comparative test of music streaming services.

Pure has announced an on-demand streaming music service called Pure Music. A subscription service costing £4.99/month, it will allow you to stream and buy music across a range of internet-enabled devices.

Set to launch in December, Pure Music will allow you to stream from a selection of millions of tracks accessible via the Pure Lounge portal on a computer or on your Pure internet radio.

The existing Pure Lounge iPhone app will also be upgraded to support the new features and allow streaming music.

Your subscription will sync across all your Pure devices allowing you to create and access playlists across radios such as the Pure Evoke Flow and One Flow.

As well as streaming you will be able to buy tracks through Pure Music. The store is powered by 7Digital – also behind Spotify's store – so packs an impressive library.

Pure Tag will also be included, allowing you to identify tracks as you hear them on the radio, and in turn stream or buy them.

Offline playback and an Android app are also in the pipeline for the Pure Music service.

Due to launch in December, a free update will roll out across Pure's eight internet-connected radios and on the Pure Lounge desktop and app.

You can register your interest on the Pure website now.