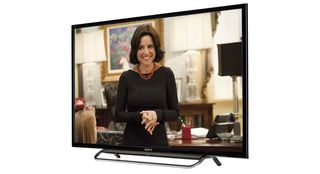 2014 has seen some tremendous advances made in the television market. Sometimes the annual overhaul of every brand's range of TVs can seem no more than habitual, but this year has seen value for money on the rise while the cost of 4K screens, the brave new TV frontier, has plunged.

No matter the size of screen you're after or the money you have to spend, 2014 has been a vintage year - and here are the best TVs you should buy.

Sony - which scooped nine Awards in total - won two Best Buy Awards for its KDL-32W706B and KDL-40W605B TVs, having seen off extremely stiff competition thanks to the full-on Full HD peformance it's offering at extraordinarily alluring prices.

There's absolutely no scrimping on the specification of these two TVs, from the breadth of their online smart functionality to the quality of the control app they share. Build quality is impeccable, looks are stylish and picture performance is as good as we've seen all year.

At the other end of the scale, Samsung gave us the best pound-for-pound 4K ultra high-definition TVs we've seen so far: the UE55HU7500 and the UE65HU7500.

Bringing amazing 4K detail and fidelity down to what can reasonably safely be called 'real-world' prices, both these TVs bring the future of television to the mainstream. There's not too much native 4K content around, admittedly, but what there is looks stunning on either of these TVs.

The Product of the Year, though, takes the performance-per-pound baton and sprints away with it. Samsung's UE48H6400 combines prodigious picture-making talent, a wealth of smart features and lovely design and build, and puts them all into a 48-inch package that sells for less than £700.

If there's better value anywhere in the TV market we've yet to see it, and that's why the Samsung is our favourite TV of the year.