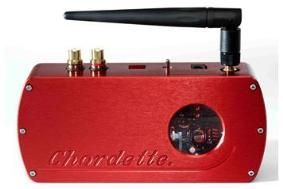 Launched in London this afternoon, the Gem is one of the most affordable products the high-end hi-fi company has ever produced, retailing at £399.

The idea came to Chord Electronics founder John Franks when he was initially thinking of developing a conventional iPod dock for the company's high-end hi-fi systems.

"We realised young people, those under 30, are downloading a vast number of tracks, not only to iPods but also to mobile phones," says Franks. "A vast amount of music is locked into phones and simply wasn't being connected to home hi-fi systems."

Through a contact at Nokia, Franks and his team were put in touch with some of the original Bluetooth development team set up between Nokia and Sony Ericsson. They explained that there is an unused, high-quality digital datastream in Bluetooth A2DP-enabled phones that no-one was using.

Chord realised this could be used for the effective wireless transfer of music from phone to hi-fi. The result is the Chordette Gem, a small, 24-bit digital-to-analogue (DAC) converter that can lock on to a wide variety of mobile phones with A2DP (Advanced Audio Distribution Profile) Bluetooth connectivity.

The user simply gets the phone to search for any Bluetooth devices, selects the Gem and once the two are synched, the Gem will relay music from the phone via conventional analogue phono outputs into the back of an amp or hi-fi system.

There's also a USB socket so you can stream music directly via a wired connection from your PC to the Gem.

"The standard Bluetooth signal used for in-car hands-free systems is low-quality mono," explains Franks, "but A2DP is designed as a higher quality stereo signal for the transfer of music."