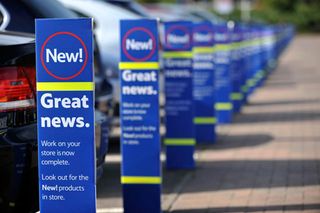 Apple, Samsung and HTC – it's fair enough to assume that one of this trio will claim the mantle of this year's must-have smartphone, but that's not stopping new contenders from entering the battle.

The latest company to fix its sights on cracking the smartphone market is Tesco, with the British retail giant revealing its plans to release its first own-brand handset by the end of the calendar year.

Tesco CEO Philip Clarke told BBC Radio 5 Live's Wake Up To Money that the device will operate on Android software and will aim to go head-to-head with the Samsung Galaxy S5 in terms of specs.

Meanwhile, Clarke said the Tesco-branded smartphone will come with pre-installed software that will let users access Tesco services, which will no doubt include everything from shopping to banking.

No prices have been confirmed at this point, but its hoped that the launch of Tesco's new smartphone – a first for a UK supermarket – will build on the success of the firm's Hudl tablet last year.

The Tesco tablet has sold 500,000 units since coming to the market at an affordable £119, and it's also been confirmed that Tesco will be introducing a refreshed version – the Hudl 2 – in September.