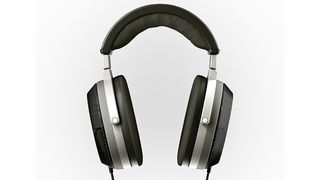 How do you like your headphones? Eye-wateringly expensive and built using more than 40 years of electrostatic design expertise? Showcasing German precision engineering and minimalist design? You're in luck.

High-end audio specialist, T+A, has decided now is the time to launch its first ever pair of headphones, the T+A Solitaire P, and the company's first headphone amplifier/DAC, the T+A HA 200.

Previously concerning itself with amplifiers, DACs and speakers costing four figures and up, T+A is promising a new level of headphone performance from its planar-magnetostatic headphones and Class-A design headphone amplifier.

Joining the company's Solitaire speakers, an anniversary edition pair of which went on sale for £46,000 last year, the Solitaire P headphones use an ultra-lightweight membrane, which covers the whole area of the ear cup and is positioned between the planar magnetostatic drive system.

The entire surface area of the membrane is driven in this design, with T+A promising a spacious, airy feel. Aircraft-grade aluminium and "the softest leather" aim to apply a finish befitting of the word premium.

There are three headphone outputs, each of which can be fine-tuned according to the headphones. Using the company’s HV analogue technology, previously reserved for its flagship range of high-end audio components, the HA 200 has a high-quality power supply with two separate toroidal power transformers to separate the analogue and digital circuits.

The HA 200 has some eight inputs, with twin optical and coaxial digital inputs, plus AES/EBU and BNC options, and balanced and unbalanced analogue connections. There's also the option to add an HDMI board with twin inputs and an ARC output.

See all our T+A news and reviews