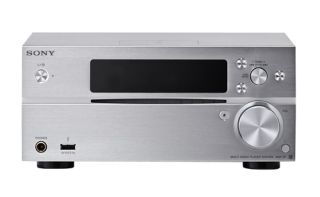 Sony has announced the launch of its new MAP-S1 Multi Audio Player System, which becomes the latest addition to its range of products capable of handling high-resolution audio files.

The new device has been designed to fit on your shelf or bookcase and boasts a 100W amplifier, a CD and a tuner. It'll also let you stream digitally stored music on your computer or online.

In addition to handling 24-bit, high-resolution audio files, the new MAP-S1 will also play a wealth of standard file formats such as MP3 from a multitude of sources and connected devices.

You'll be able to stream your music by connecting a USB thumb drive or your smartphone via cable, Bluetooth or Apple AirPlay, as well as offering FM, AM and DAB radio capabilities.

Under the cover, Sony's S-Master HX Audio Amplifier is used in order to reduce distortion and noise, while DSEE HX upscales your existing music collection to better than CD quality.

Sony has also designed and produced a pair of speakers to partner the MAP-S1; the SS-HW1, with high-resolution audio. They comprise a 13cm woofer with Mica Reinforced Cellular (MRC) fibre cone.

Sony has also incorporated a Wide Dispersion Super Tweeter. Two tweeters have been used instead of the traditional one. One is on the front of the speaker, the other on the top. This is to help expand high frequencies and open up the directivity of the sound.

In addition to the MAP-S1, Sony has also expanded its range of high-resolution audio products with the launch of two new AV receivers and the BDP-S7200 SA-CD/Blu-ray player.