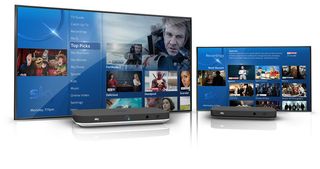 The new plans will see the latest Sky Q TV service made available to customers without the installation of a satellite dish, with programmes instead delivered over broadband to a new set-top box.

The only way to access Sky TV content without a dish is currently via Now TV, which offers a taste of Sky's content, delivered over the internet to an app or set-top box.

Sky says this will allow "millions of homes" currently unable to install a dish to access the full Sky TV experience.

The move was annouced as part of Sky's latest financial results, which revealed a six-month operating profit of £679 million. This was down £65 million year-on-year, which Sky attributed to the £314 million extra cost of Premier League football.

Sky also announced a new My Sky app, which promises rewards and special offers to existing customers based on how long you've been a Sky subscriber.

Sky also reiterated the new Sky Q features coming in 2017, which include voice search, the ability to record six channels and watch a seventh, a more personalised interface and the option to 'start over' live sport from the beginning of the broadcast.

We also caught a glimpse of new features on the Sky Q roadmap, including Dolby Atmos, voice control and the ability to select your favourite channels.

Sky Q is now said to be in around 600,000 homes, with more than one million boxes in use. The Sky Q box is now the standard Sky TV box, with Sky reporting that 25 per cent of new customers are choosing to pay for the extra Sky Q functionality.

In other news, Sky revealed the Sky Store is on track to become the number one digital movie retailer in the UK, with Sky predicting it will overtake iTunes by the end of 2017. The service has established a 30 per cent market share by revenue for digital films, hitting 50 per cent over the Christmas period.