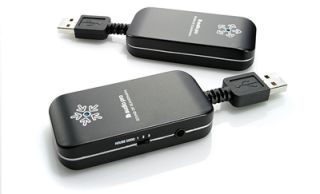 Judging from the whathifi.com Forums and elsewhere, there's a lot of confusion about the hows and whats of music streaming. Do you need a NAS drive? Will Product X connect to Player Y? How do you set the whole thing up?

You can see why some people get put off the idea, however appealing it may be: what once meant professionals pulling wires through walls and a stack of switching electronics can now be achieved with little more than the right bits of kit, but it does seem to many like just too much of a faff.

It's no wonder that systems such as Sonos and Apple AirPlay are popular, simply because they make all this stuff – well, simple. But what happens if you want an even more basic system, in that you just want to get music from a computer at Point A to a hi-fi system at Point B, and do so without running wires round the house, working out IP addresses and all that stuff.

Simply, this system works on its own wireless network, and comprises one unit you plug into the USB output on your computer, and another almost identical-looking one with analogue outs to feed audio into a system.

Or you can do it the other way round, feeding analogue audio into a computer. Or run it computer to computer, or even analogue to analogue.

So, two wireless dongles, with a USB plug and 3.5mm audio sockets. Depending on configuration, one is powered via USB and the other via a mains-to-USB converter, and you get a couple of 3.5mm-to-3.5mm stereo interconnects and an adapter to split 3.5mm stereo into two phonos.

The TX100 transmitter and RX100 receiver look very similar, except the former has a logo with white arrows going out from its blue LED, the latter has them going inwards. Makes perfect sense to me.

And that's about it: the system has a range of around 20m room-to-room or up to 100m in open space, uses channel hopping to avoid interference from mobile phones, microwaves and the like, and offers a choice of three 'House Code' channel switch positions, so you could run up to three systems in the same house without problems.

Or you can run as many receivers as you like from a single transmitter, with extra RX100s available at £85 a pop.

So if you really wanted, you could run music from your computer to every room in the house - well, at least ever room in which you have a hi-fi system, or at least a pair of Audio Pro's wireless speakers, which range from the Living LV1 desktop single-point stereo unit (above) to the frankly slightly mad-looking leather-clad Living LV3 floorstanders (below).

It's limited to CD-quality and below, so no streaming those Studio Master FLACs – but then is that really such a drawback with a system as simple as this, which is more likely to find itself sending MP3 rips or downloads around the home?

And it worked room-to-room, downstairs to upstairs and even down the garden, which is really as much as anyone could really want.

True, it's no substitute for an all-singing-and-dancing multiroom system, as you have to control what's being played using the sending device, and I'm sure with a bit of cunning and knowing what you're doing you could probably rig up something to do the same job for the same price or less.

But none of that's really the point: the beauty of this system is that it's been well thought through, is easy to set up and just works.