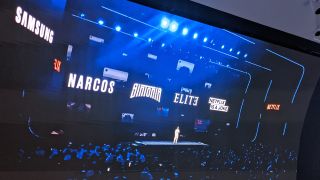 Samsung's focus for its Galaxy Unpacked 2020 event this evening was naturally its Galaxy S20 Series phones and its Flip Z foldable device, but it also announced a new partnership with Netflix and teased what fruits that would bear in the future.

The streaming service has become Samsung's mobile entertainment partner and will give Samsung Galaxy smartphone owners an enhanced Netflix experience.

For one, Netflix will be integrated into into Bixby ("Bixby, play Stranger Things"), the phone's search bar and the Samsung Daily screen. You can expect pop-up recommendations from Netflix too.

And secondly, Samsung mobile owners will also get exclusive bonus content around Netflix Originals. Samsung's example tonight: behind the scenes of Narcos: Mexico.

Not surprising considering that moments before it announced a whole line-up of 5G phones, Samsung was keen to reiterate that 5G would allow for the fast downloading of content onto the new Galaxy mobiles.

We'll be keeping our ears out for further announcements.

The 33 best TV shows to watch on Netflix right now