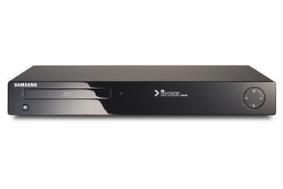 First there's the firm's new Blu-ray player, the BD-P1500, which will sell for an incredibly affordable £249. We'll be testing it shortly, but we can tell you now it decodes Dolby TrueHD sound, will be upgradeable via firmware to Profile 2.0, has a USB connection and is 1080p/24fps capable.

Also sitting in our test rooms is the new Series 5 PS50A556 plasma TV, a Currys exclusive available for £1349. It's a Full HD, 1080p model with a claimed contrast ratio of 30,000:1, three HDMI inputs (all HDMI 1.3a), USB 2.0 connectivity, a Sports Mode, anti-reflection screen and Natural True Colour processing. We'll be reviewing it in our September Supertest of 50in screens, on sale July 24th.

As last year, Samsung is making different versions of the screen for different retailers, so while the 556 models is exclusive to Currys, Comet will get the 557 version and all other retailers will sell the 558. All three models cost the same, but we've asked for review sample of each one to check them out.

There'll be a new series 6 Samsung plasma, the 656, available in about a month in 50in and 58in screen sizes. And a Series 7 plasma will follow in September.

Also just hitting the shops are three new home cinema in a box systems, including the HT-X715. It costs £379, has HDMI and USB connectivity, upscaling to 1080p and Anynet control so you can use one remote to control your entire Samsung home entertainment system.

For a full review of Samsung's just-launched HT-BD2 Blu-ray home cinema in a box, check out the August issue of What Hi-Fi? Sound and Vision, on sale now.