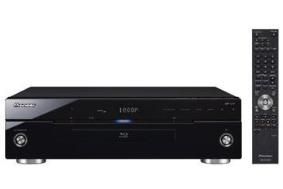 Kuro Link gives full control
There's even a new remote handset, which can also – thanks to Kuro Link – control your Pioneer TV, should you have one.

We've only seen glimpses of the rest of Pioneer's Blu-ray line-up, and are working on getting pictures to share with you. In the meantime, here are the specs we know.

With a similar Profile 1.1 spec – though with a lifestyle look – is the BDP-LX08. Also firmware upgradeable, and sharing many of the high-end features of its BDP-LX71 sibling, the 'LX08 looks an interesting offering if you're after a sleeker-looking HD solution. It's due by September and prices have yet to be set.

The flagship model of the range – the BDP-LX91 – also lands later this year, sporting a mighty size, spec and price-tag (estimated at £1500).

The LX-03BD, meanwhile, is an all-new design with the ultra-sleek, 'low and long' looks reminiscent of a vintage Bang & Olufsen system – and similarly smart motion-sensitive controls. Further details, pricing and availability of the systems have yet to be revealed.

We hope to bring you reviews of Pioneer's new Blu-ray range as soon as possible – watch this space!