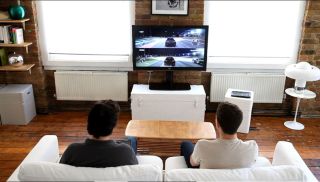 A Kickstarter campaign has now started in an attempt to make the G-Pack become a reality, with the Steam-optimised PC designed to hide behind your flatscreen TV if its 37in in size or larger.

We've seen a fair few AV innovations come to the Kickstarter crowdfunding platform in 2014 and PiixL becomes the latest, hoping to achieve success similar to the PonoPlayer or The Dash.

The London-based start-up is hoping to secure $150,000 worth of pledges by 1st November and that funding will be used to finance the first production run. It's expected to ship in February.

But what is it, we hear you ask. It's billed as an "ultra-quiet, high performance" gaming PC, VESA-mountable with a thin aluminium chassis housing a fully powered gaming rig.

Its extendable chassis means that you'll be able to access the G-Pack controls on the edge of the TV its "hiding" behind, while it can slide in and out its brackets without having to unmount the TV.

Not only that, but PiixL says the G-Pack is also equipped to support 4K Ultra HD content as and when it becomes available in the future. And you can choose from three G-Pack configurations.

A PiixL spokesperson said: " PiixL has achieved the unfathomable and created a gaming PC that will remain virtually invisible and inaudible while packing as much punch as a full-on gaming rig."

MORE: 4K Ultra HD TV – reviews, news and everything you need to know