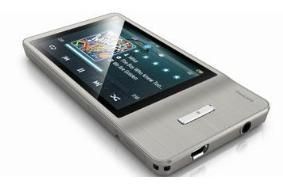 The Muse now comes in a svelte, silver casing and packs in an HDMI output for viewing 720p, HD videos on your TV.

File format compatibility has been improved, with FLAC and APE lossless now supported alongside the usual MP3, WMA, AAC and WAV formats, amongst others.

It's also compatible with downloaded BBC iPlayer files and the Napster To Go service.