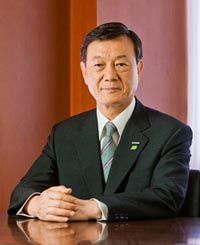 Each day seems to bring more about the woes of the Japanese consumer electronics industry, and some recent coverage in the country's Nikkei business daily gives some idea of just how tough things have become.

In an interview, new Panasonic chairman – and former company president – Fumio Ohtsubo (left) says 'We will shift our focus from selling TV sets and other electronics goods on a per-unit basis to marketing various systems and business solutions'

Meanwhile one of his predecessors says says 'we messed up' when it came to taking early steps to turn around the ailing TV division as far back as 2006.

And a financial analyst says Japan's TV manufacturers missed their chance to revive their fortunes at the time of the 2008 Beijing Olympics, and have since 'been dragging their feet for the past four years.'

All looks pretty bleak, doesn't it?

Ohtsubo's interview, published this week, follows on from one given to The Nikkei by 72-year-old Kunio Nakamura, who retired after Panasonic's annual shareholders meeting last month, having served as president and chairman for 12 years.

Asked why the company's TV business finds itself in its current parlous state, Nakamura (right) said that 'We made a major strategic blunder. When I became chairman and was succeeded by (Fumio) Ohtsubo as president in 2006 – when our earnings performance was still good – we had already faced the challenge of how to change our business structure so we would rely less on the TV business.

'It was a tough call, but we can't deny that we were too late in making this crucial decision. We could have acted much sooner -- we messed up. The golden age of TV is over, and TV will never be king again in the consumer electronics space.'

Meanwhile Ohtsubo says of the measures so far to restructure the TV operations that 'In fiscal 2011, we had to lay off so many employees, and I handed letters of appreciation to them. I worked with many of them before in the TV business. They didn't have any harsh words for me, but that almost made it even harder.'

Ohtsubo says that his vision for the future of the company is that 'We will shift our focus from selling TV sets and other electronics goods on a per-unit basis to marketing various systems and business solutions.

'While it is important to retain the business-to-consumer segment, I see more business opportunities in the business-to-business field. We would like to define a new image for Panasonic, one that doesn't rely on our existing businesses.'

But according to analyst Hideki Wakabayashi (left), president and chief investment officer of Finno Wave Investments, such changes may be too little too late for the Japanese TV industry: 'Japanese TV makers still had a chance to make a comeback until the summer of 2008, when demand for flat panel TVs was soaring because of the Beijing Olympics.

'They would not have suffered as much as they are now if they had done something to change their business structures, but instead they have been dragging their feet for the past four years.'

He feels that the Japanese TV industry 'had already started to weaken even before the yen was strengthening against the dollar; the strong yen is merely putting the final nail in the coffin.'

He suggests that the major problem has been the insistence of Japanese companies to own both the design but also the production of their products: citing the success of companies such as Dell and Apple, he says those firms 'have deftly used outside EMS (contract manufacturing) companies to help grow their own companies.

'Meanwhile, Japanese manufacturers have stuck too much to their strategy of manufacturing at their own factories, falling further behind the global shift to EMS-based production.'

His view is supported by academic Prof Kazuhiro Mishina, of Kobe University (right), who says that 'Japanese TV makers pushed their U.S. competitors out of the global TV markets before, and now the same thing is happening between Japanese and South Korean manufacturers.

'History is repeating itself.'

And Mishina doubts that alliances between Japanese companies can see off this threat: 'US manufacturers have successfully turned themselves around partly because they capitalise on electronics manufacturing service (EMS) companies like Hon Hai, forming a US-Taiwan alliance, if you will.

'Moreover, these Taiwanese firms tap cheap labor in China, serving as an intermediary between the U.S. and China.

'However, Japanese firms have been left out of such dynamics. They will need to find business partners with different strengths going forward. A marriage of like-minded Japanese firms would not work. They have to find ideal partners quickly while they are still financially sound.'

Analysis doesn't get much more ominous than that...