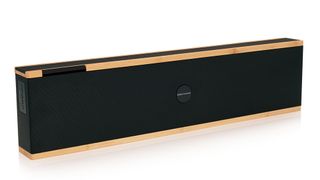 It’s always exciting when a new and interesting technology arrives, but when it debuts in a multi-thousand-pound product it won’t necessarily get everyone talking. What will, is an accessible, consumer-friendly embodiment of it – which is exactly what Orbitsound's new budget soundbar delivers.

The ONE P70W V2 (£399) is, as the latter part of its name suggests, an update of the original ONE P70W; an update Orbitsound is calling “transformative” thanks to a new proprietary high-end technology it leverages.

It's called Transconductance Amplification, and was introduced in Orbitsound's £12,000 Air D1 speaker. Essentially, it works to monitor the speaker's performance and dynamically correct the amplifier's output accordingly in real time to eliminate distortion in the audio signal – to ultimately create a better partnership between the amplifier and drivers.

Those familiar with Orbitsound won't be surprised to read the words 'Airsound technology', which is part and parcel of many of the brand's products and is present in the ONE P70W V2 in new-and-improved form.

This also-proprietary technology is focused on producing a convincing, spatial stereo image to all positions in the room from a one-box design. How? By delivering “central” information in a stereo image through the front drivers while firing “non-central” details through side-firing drivers.

Both these technologies, which you could say appear born for movie soundtracks, look to make the very most out of the ONE P70W V2’s driver array, which is comprised of upward-, side- and front-firing 2in Orbitsound MK4 drivers, as well as a 5.25in integrated woofer.

A TV connection is typically accommodated by an optical input, but in addition to its soundbar duties the ONE P70W V2 is determined to double as a wireless speaker that satisfies today’s streaming-obsessed market. Hook it up to your wi-fi network, and Spotify Connect, Apple Music and TuneIn Radio are all at your fingertips via the accompanying Orbitsound app. The app is also a gateway to forming a multi-room system with several of the speakers. Bluetooth and a 3.5mm socket are also onboard.

The ONE P70W V2 also tries to be as flexible as it can when it comes to positioning, and can be sat in front of a TV, on a shelf, or wall-mounted. With regards to the latter, it has two wall-mounting orientations depending on whether you want to mount it high or low on the wall.

The ONE P70W V2 comes in black and bamboo finishes, and is available for £399.