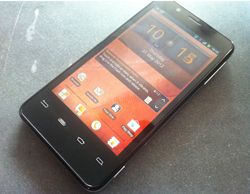 Orange has announced its San Diego smartphone, the first UK phone to be powered by Intel Inside.

The Intel Atom Z2460, 1.6GHz processor powers the phone, while there's an 8MP rear camera capable of 1080p video capture and a burst mode capable of taking up to 10 frames per second with a single press of the button.

The first Orange Intel smartphone will be backed by a multimillion pound advertising campaign, with more Orange-branded smartphones promised.