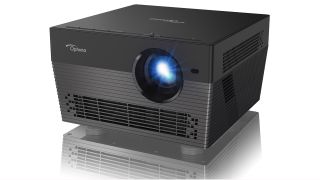 The UHL55’s ambitions surpass simple projection duties. It marries 4K and HDR playback (via its two HDMI 2.0 and single USB) with support for Alexa voice control (via an Amazon Echo device) and music streaming over Bluetooth. Apps such as Netflix, YouTube and Spotify can be directly accessed via the built-in App store, and wi-fi provides internet access and over-the-air firmware updates.

The UHL55 utilises the latest LED technology, which Optoma says can deliver 118 per cent of the Rec.709 colour spectrum and is capable of a perceived brightness twice that of an ‘equivalent’ lamp-based projector. It also supposedly has a light source lifetime of up to 30,000 hours.

The UHL55 has been designed to be easily moved around, while auto focus and auto keystone controls aim to keep set-up quick and simple.

Its built-in stereo speakers are capable of decoding Dolby 5.1, although Bluetooth functionality also means external speakers or headphones can be wirelessly connected.

Alexa allows you to, for example, turn the projector on or off, adjust volume, or switch inputs - although this is only do-able by interacting via an Amazon Echo device. At launch, the feature will only be available in the UK, US and Germany.

Black Friday 2018 – everything you need to know