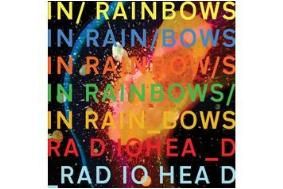 The release of In Rainbows on a pay-what-you-want basis last October generated huge traffic to the band's own website and intense speculation about how much fans had paid. Industry sources say Radiohead took £4m in the first week the album went on sale.

However, the huge number of illegal downloads has led to calls that the music industry should embrace illegal file-sharing websites, according to a report on The Financial Times website.

A study by the MCPS-PRS Alliance, which represents music rights holders, and Big Champagne, an online media measurement company, found that illegal downloads of In Rainbows far exceeded legal downloads of the album.

"Rights-holders should be aware that these non-traditional venues are stubbornly entrenched, incredibly popular and will never go away," says Eric Garland, co-author of the study, which concluded there was strong brand loyalty to torrent and peer-to-peer services.

Almost 400,000 illegal downloads were made on the first day of In Rainbows' release and 2.3 million in the following 25 days.

Garland urged record companies to study the outcome and accept that file-sharing sites are here to stay. "It's time to stop swimming against the tide of what people want," he says.